Last week, I realized that we never updated you on the whole garage thing (I know, you have been on the edge of your seat in anticipation for the latest news and for that, I sincerely apologize). I know I have mentioned the garage here and there, but I think it’s time for the full story.

Normally, when people want to add some structure to their existing house, they draw out the plans and submit them to the county for a permit. The process is fairly straightforward and takes a few weeks, depending on how behind the county office is.

In our case, when we decided we were ready to build the garage, [insert sarcastic tone here] we thought it would be so boring to do it the ‘normal’ way. 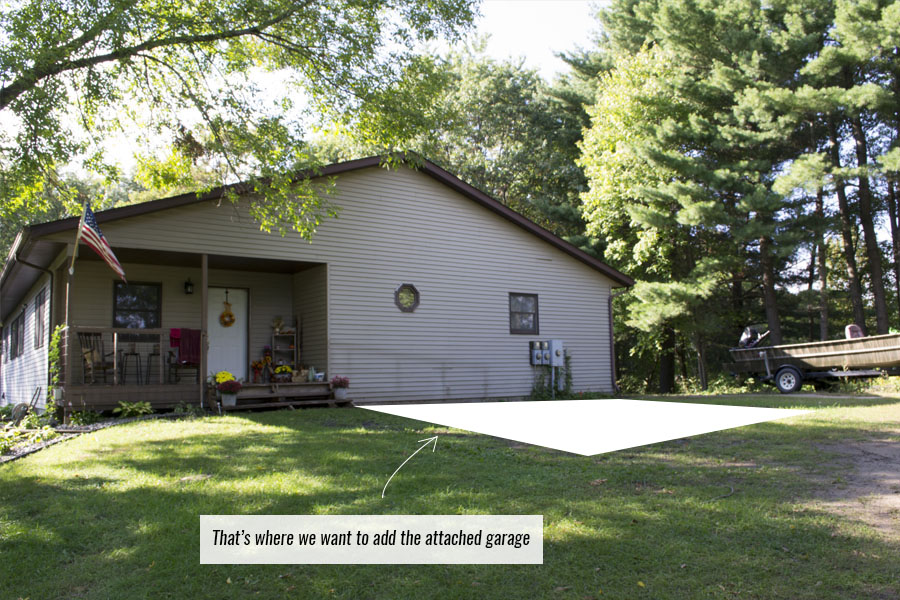 Let’s rewind to when we first moved in.

We bought the house with the intention of building a garage. We live in Minnesota, so a garage is kind of a non-negotiable.

About two or three weeks after moving in, my mom was standing outside with the dogs and Neighbor Ron came over to introduce himself and welcome us to the neighborhood. I was about knee deep in cabinet paint, so she ended up talking to him by herself. Somehow it was brought up that we couldn’t build a garage on the property. The previous owner had tried and was denied, which was why she had this ugly metal pod sitting right in front of the house.

Naturally, when I hear that we can’t build a garage, I go into full-on panic mode and call Brett.

Fast forward to the next week and after talking with the zoning office (a very, very nice lady named Trina), she assured us that if we met all the requirements (so many feet from the water, from the road, from the easement, etc.), there was no reason why we couldn’t build a garage.

Brett gets the measurements from Trina and we measure everything. Thankfully, we’re in the clear (or so we thought).

So we head to Menards, all giddy with excitement and print out the plans for the garage.

Brett works hard on getting the permit application completed and sends that in around mid-June.

They just so happen to be very backed up at the zoning office, so it was almost one month before we hear anything from them.

Since we didn’t meet the requirements, we had to apply for a variance.

We were asking for a variance of 20 feet, which means that we would only need 30 feet between the end of the garage and the end of the street (instead of the required 50).

The variance application is accepted once per month and then an Isanti County Committee meeting is held to discuss all the variance requests from the month prior.

We ended up handing in our application in August and the variance meeting was on September 8.

At the meeting, we were number four of five seeking variances for various reasons like a guy who wanted to build a three-season porch at his mom’s house and a couple who had hunting dogs and were considered a ‘kennel’ but didn’t meet the legal zoning requirements.

When it was our turn, the committee began by sayings, “We spoke with Bradford Township and they don’t want this garage.”

Oh wonderful, way to begin the meeting on a positive note.

Shortly thereafter, they brought up our property on Google and used that against the drawings we submitted with the variance application. Apparently Google Maps makes it look like there is about two inches between our house and the edge of the road. “You should come back when you actually have accurate numbers,” says one of the board members.

This led to forty minutes of heated discussion with a few touch-and-go moments. Finally, we were granted the variance, with conditions. We needed to hire a licensed surveyor to measure the right-of-way requirements and make sure our numbers were accurate. 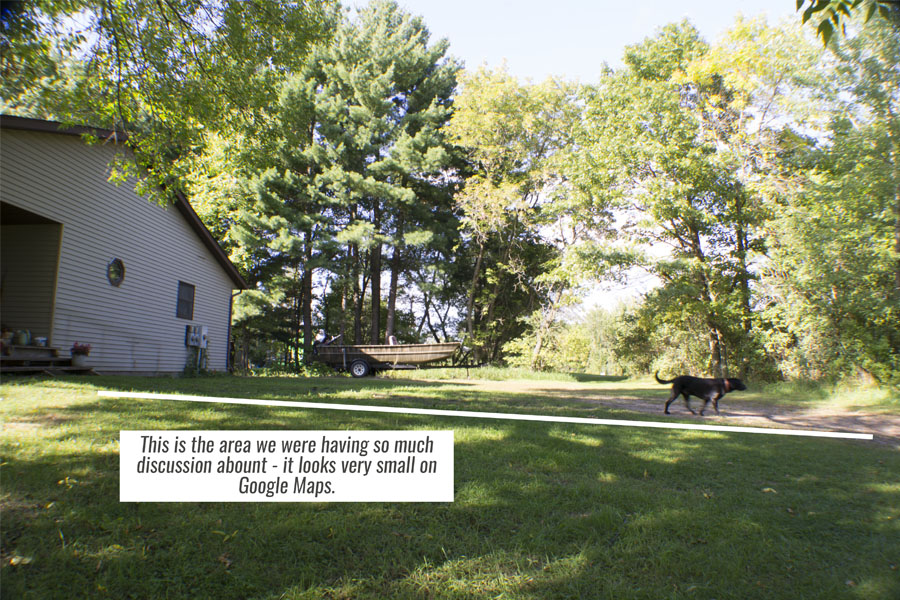 We also needed to talk to the Bradford Township Committee because they apparently have final say on if we can build a garage and they threw in there that they thought having two driveways was illegal, so we needed to check with Bradford on that matter as well.

Awesome. Another meeting. Just what we wanted.

Have you ever seen Gilmore Girls? They have a town hall meeting every few episodes and they’re funny and entertaining and cute. They all meet in this cozy room and there are a lot of people there to discuss everything. Naturally, going into the Bradford meeting, that was the idealistic image I had in my mind.

I was absolutely wrong.

We (my dad came with me because Brett was out of town for work) ended up walking into a good ole’ boys club with four older men sitting at the head table, two community members to our left and the town sheriff to my right.

Luckily we were able to discuss our concerns right away and didn’t have to sit through the entire meeting.

I explained that we were there because Isanti County wanted us to make sure Bradford Township was okay with us putting in the garage and that it was okay we have two driveways.

One guy spoke up first, “Well I don’t have a vote that counts, but if I did, I would say no. I don’t want that garage there.”

We were off to a really positive start, yet again.

We ended up going back and forth for quite some time with the board consensus being “we don’t want you to put in a garage, but since Isanti County already approved it, there is nothing we can do.” And basically the same was said for the two driveways – they were there when we moved in, the board doesn’t like them, but there is nothing they can do about it.

You may be asking yourself, “If they can’t do anything, why did we have to go to the meeting?” Truth be told, I have absolutely no idea. I think we had to go as a formality, but I could be wrong. Regardless of the reasoning, we jumped over one more hurdle and are one step closer to finally getting our garage.

Even though Bradford Township approved the garage, we still have to get a licensed surveyor out to check the measurements, per Isanti County orders.

As it turns out, fall is a very busy time for surveyors and we can’t seem to find a reasonably priced person that isn’t all booked up.

So as of today, we are putting everything on pause until the spring. Best case scenario, we are able to get a surveyor out to confirm that our numbers are accurate and we can submit that to Isanti County. Worst case, we do nothing.

Here’s to Part Two going a little smoother than the first round of this Garage Saga.

The Garage Update: Putting Up the Walls