We’re sharing an update on the progress we’ve made on the outside of our home with a new retaining wall and the front porch.

How is it already August?

I don’t know how many times I’ve sat down to write this post and then got distracted with something else.. so it’s been a long time in the making. Please forgive the delay!

I don’t feel like we’ve taken a breath all summer, but I am SO excited to share the updates we’ve been making outside.

If we jump way back to the beginning of spring, you’ll remember that the two big to-dos for the exterior included redoing the retaining wall and porch. For the porch, it was more a safety hazard than a want. The previous owners didn’t install the right footings, so everything needed to come off and be constructed in a way that actually helped.

For the retaining wall, the need came about after adding driveway mix last summer. There is a pretty big slope and we were losing a lot of the mix down the hill – from rain, from traffic, from the dogs. Anyways, we didn’t want to have to constantly replace it, so we thought adding in a retaining wall would help hold everything together. Also, curbside appeal.

We first tackled the retaining wall and then moved on to the porch. But, as you may know, before you build up, you need to tear down.

That meant the railroad ties had to go – and they were a pain in the ass to remove. Brett ended up rigging together a pulley-system that he attached to the four-wheeler. He alternated between using that and sawing the ties apart with the chainsaw.

Once they were (finally) out, we had to remove the plants and the dirt. The new wall was placed a little differently from the existing wall (of course), so we had some rearranging to do. 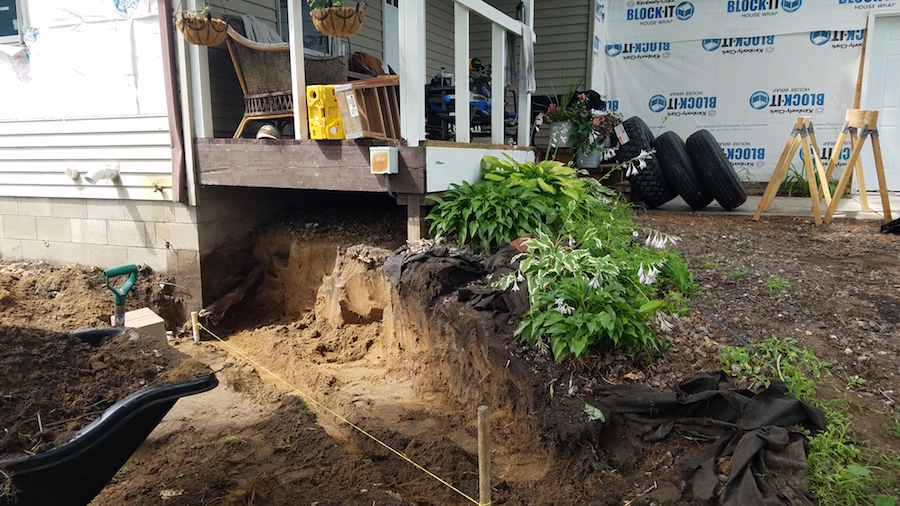 From there, it was all about the digging and hauling of the new block. I had flashbacks to August 2017 when we built the garage foundation. Luckily, we only had about ⅓ of the blocks to lug around, so it wasn’t too bad. 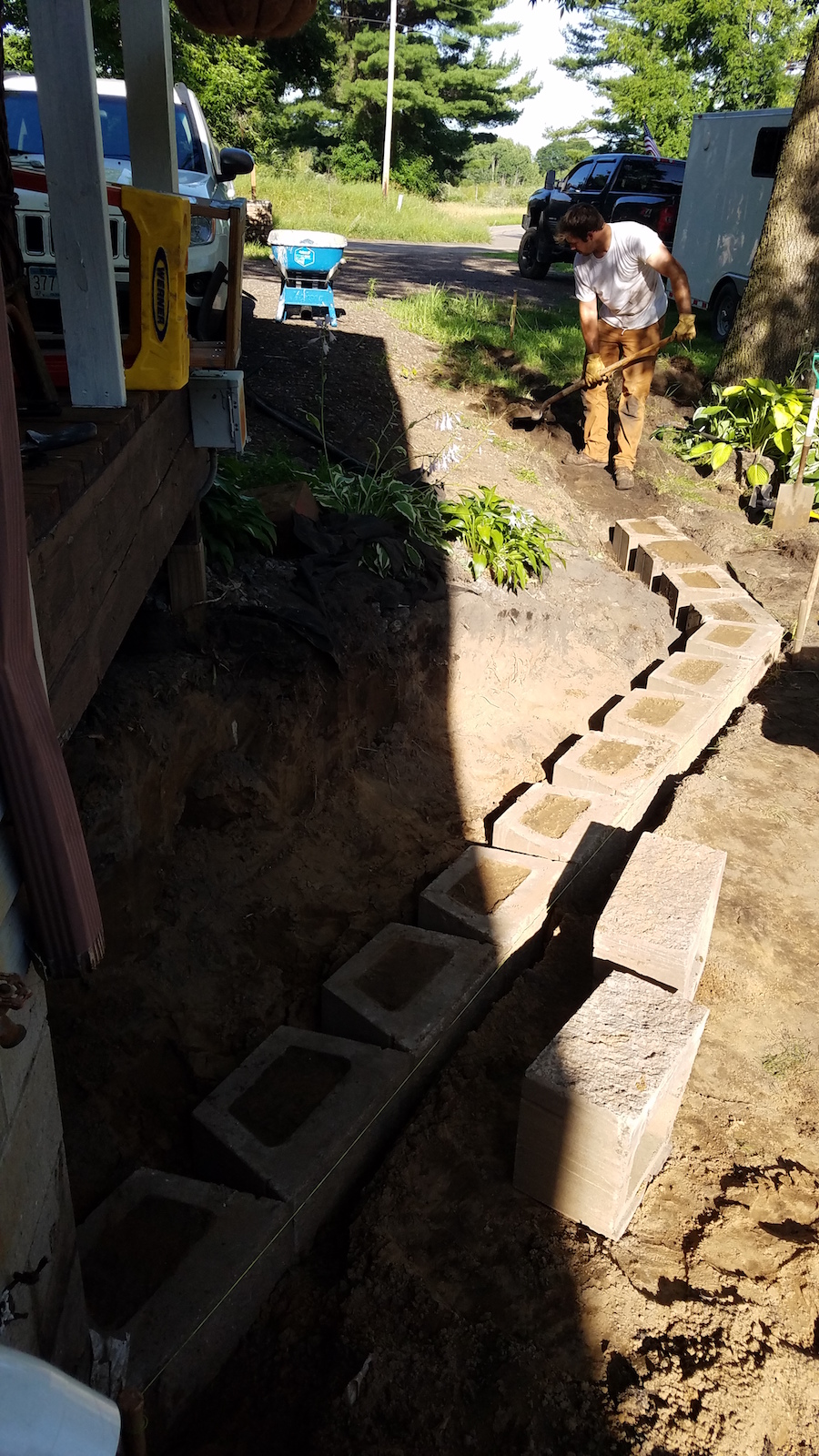 We wound up with a pretty good system going of placing block #1, making sure it was level from corner to corner, then placing block #2 and leveling it against the previous one. It was a tedious process but only took about three days to complete. 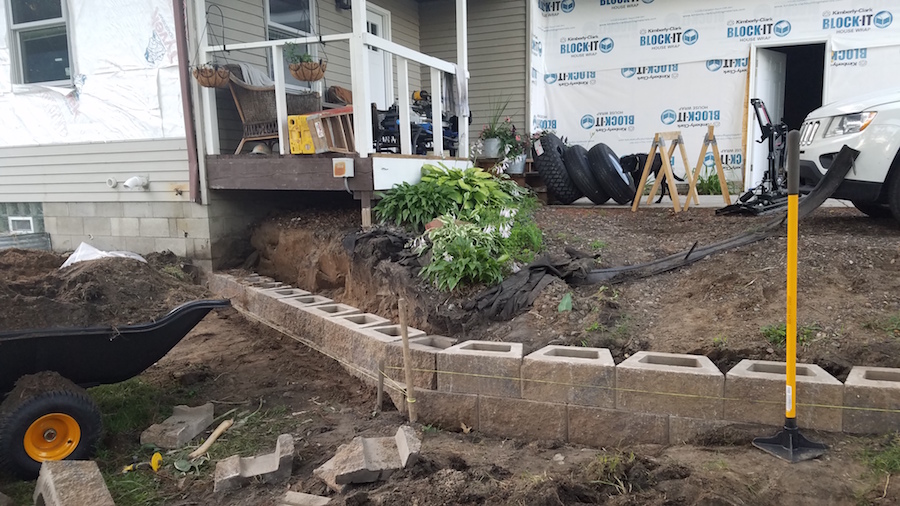 Once the wall was up, we “lined” the inside with rock pebbles to allow water to go through but not any sand/dirt. Five-ish (I lost count after the third time… :-P) loads later, we were done with the rock. Then it was time to add in the dirt and replace the hostas, while simultaneously putting in the block edging to keep said dirt in check. 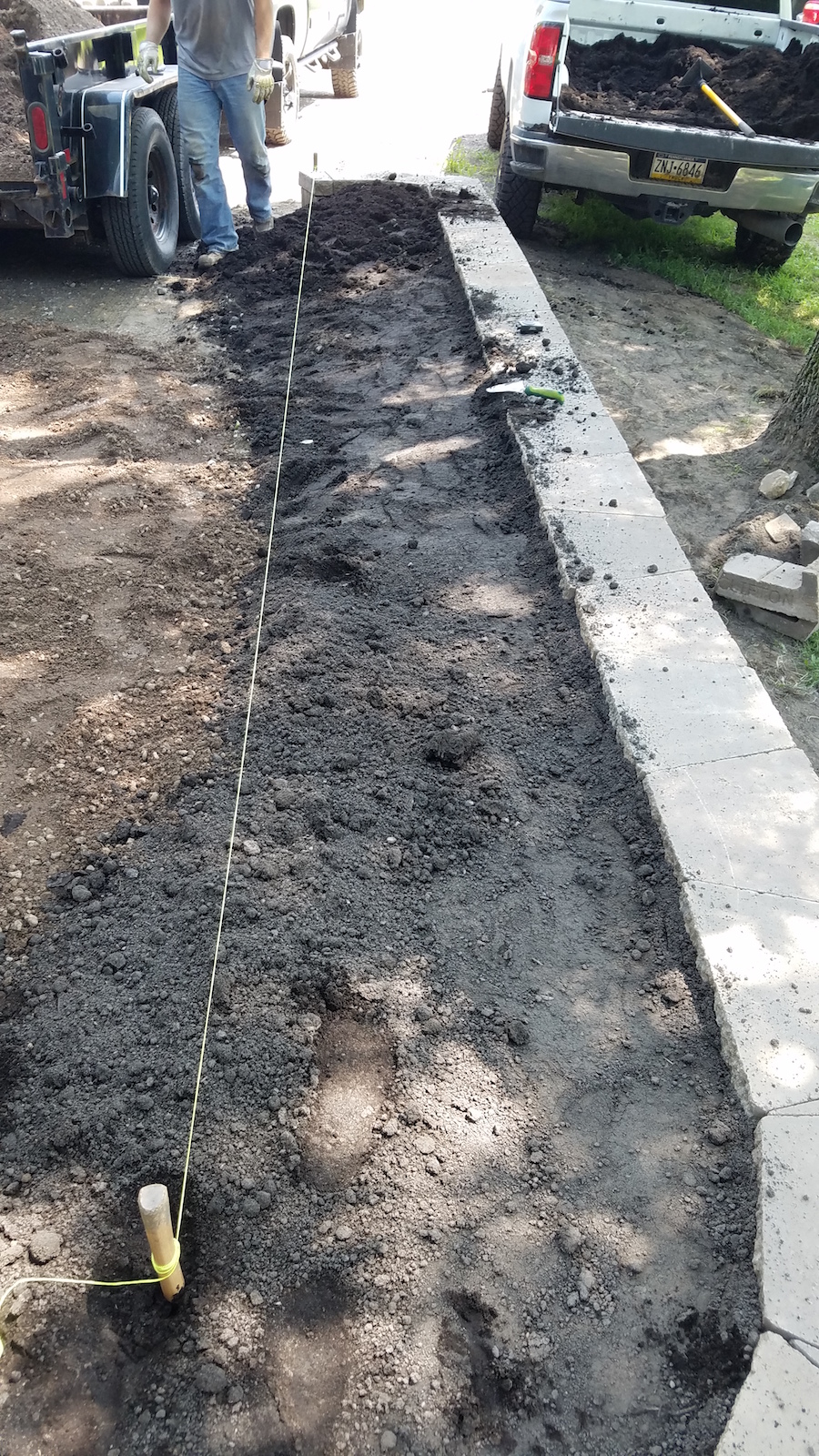 Last but not least, we bought another load of driveway mix to fill in what we’d lost during the installation. 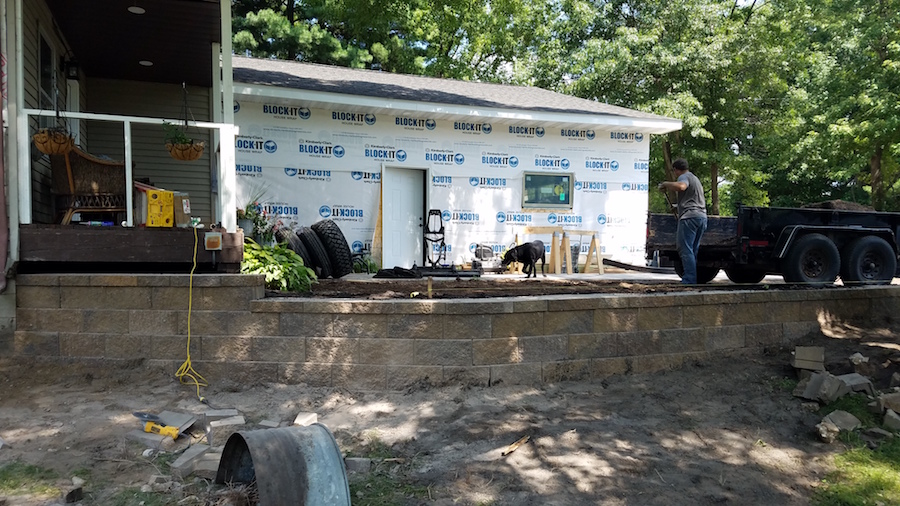 And that was it – ha! The whole project took about two weeks, with Brett working nonstop. I think we’d be okay if we never hauled another load of dirt, driveway mix, or rock ever again. 😛 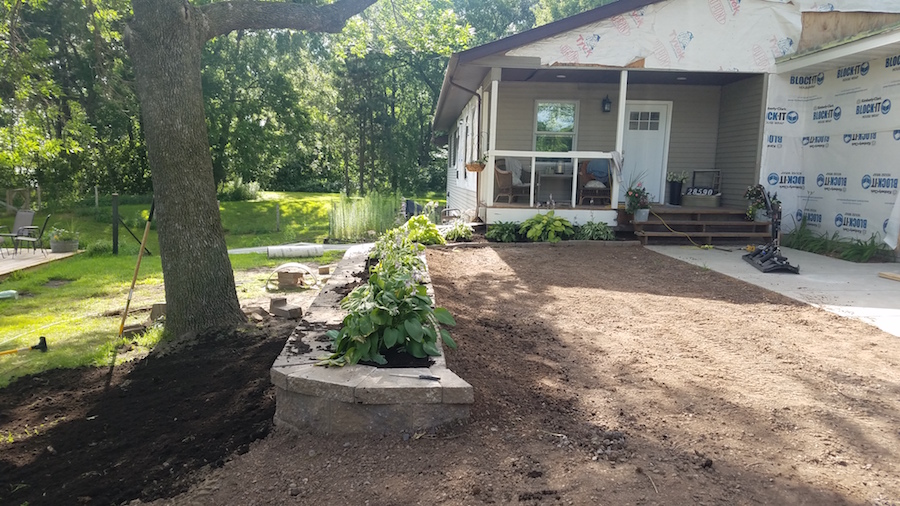 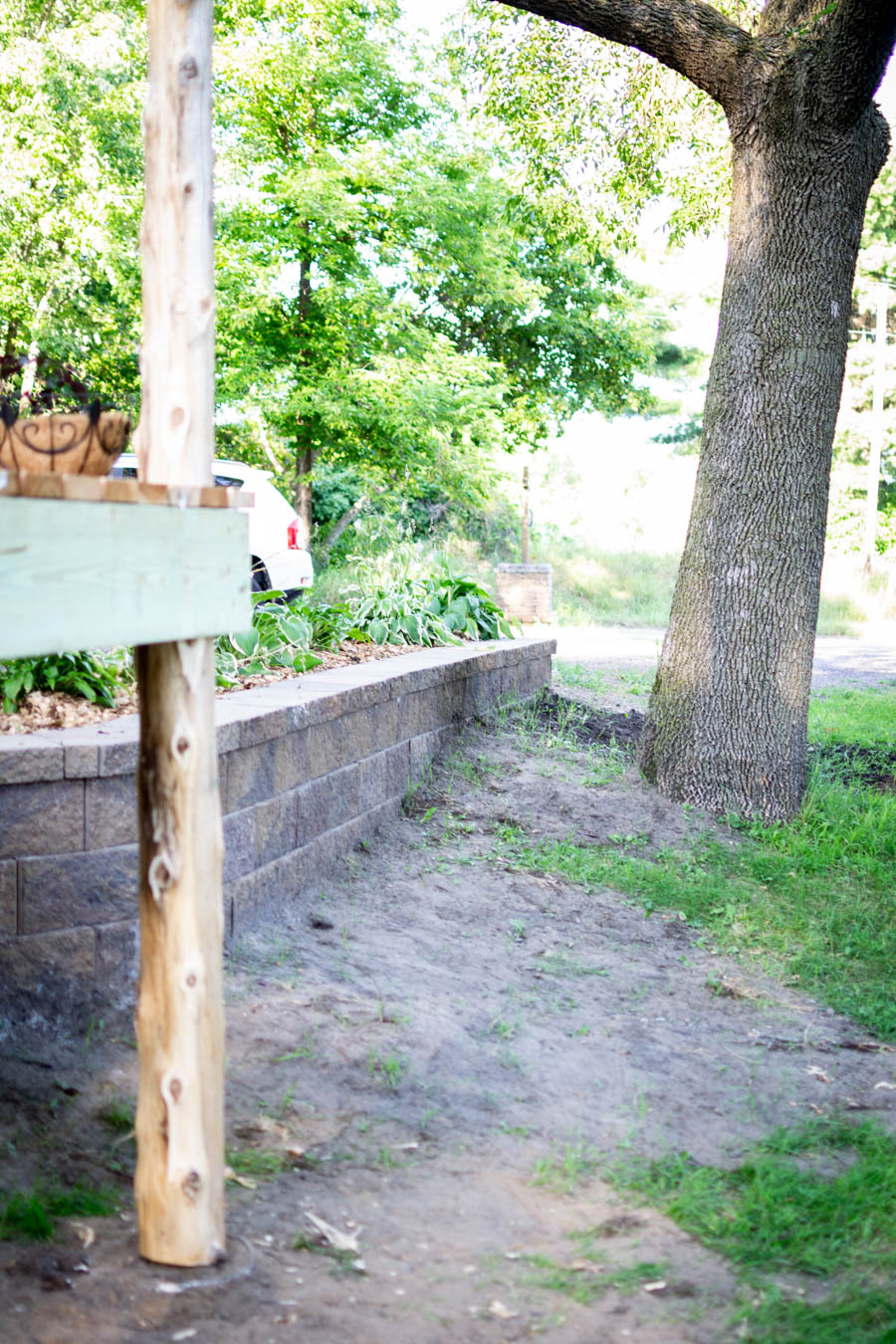 Once we completed the retaining wall, it was time to move on to the front porch.

I did forget to mention – prior to filling in the retaining wall with pebbles and dirt, we poured one of the new footings for the front porch. Because neither one of us wanted to dig that out again – workin’ smarter, not harder around here! 🙂 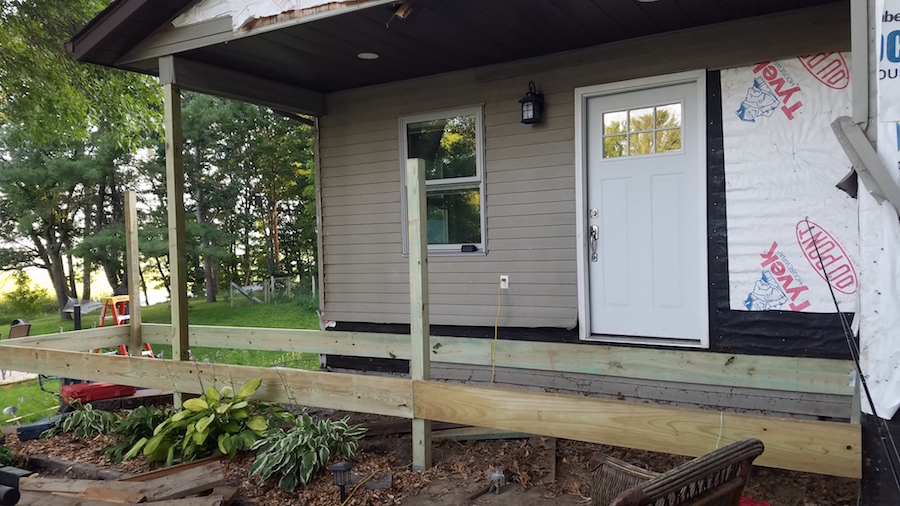 Anyways, back to the porch. Brett was able to tear everything out in one long morning’s worth of work. He also poured the other two footings for the additional length of the new porch. We’re prepping for the eventual wrap-around deck. 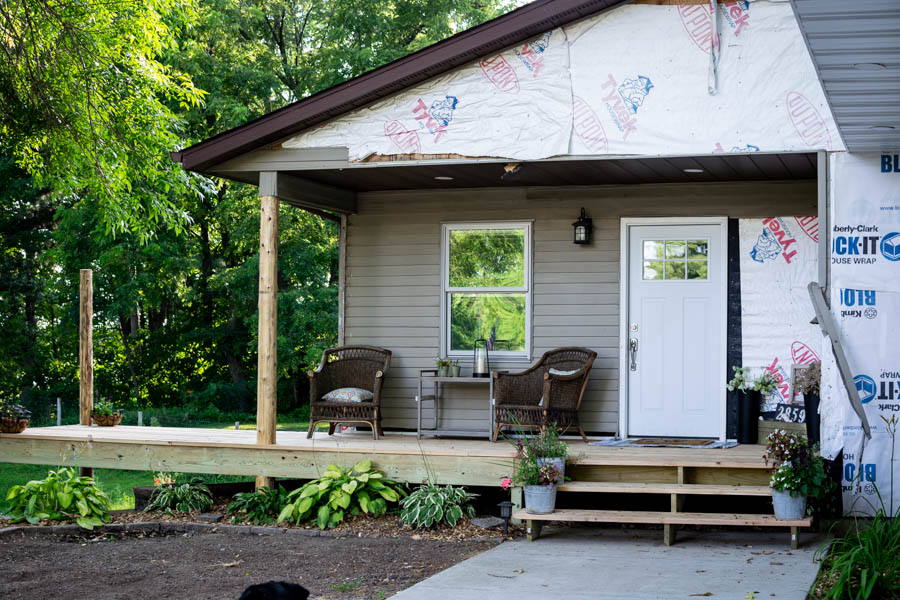 There isn’t too much of a difference in terms of how we built it back up. The framing is green treated wood and we decided on cedar for the top. We used cedar for our deck, so it’s nice to stay consistent. 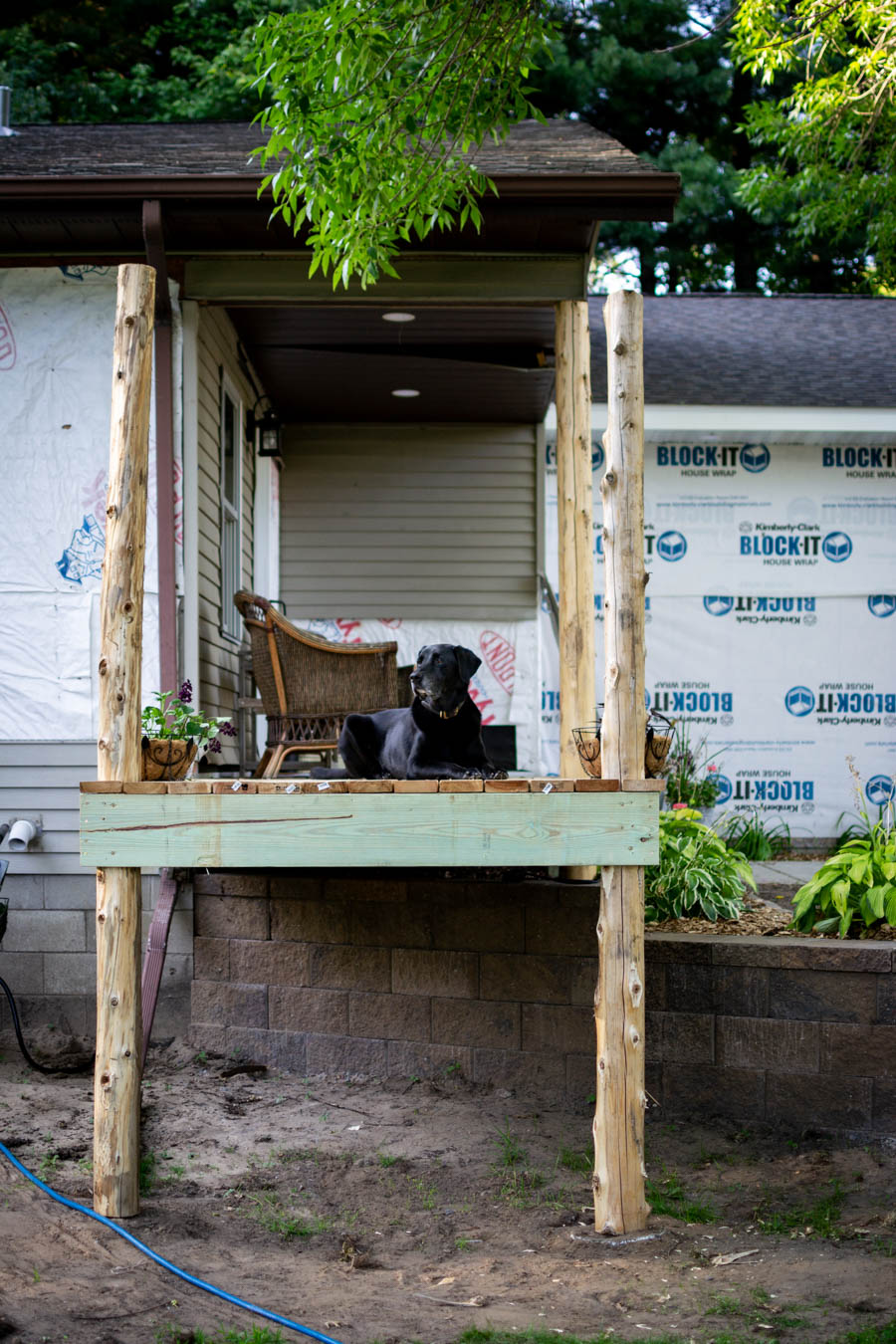 And to add a little extra charm, we swapped in rough-edge cedar posts instead of 4×4’s – doesn’t it look awesome? Brett found three at a shop about 45 minutes away from us for only $68. 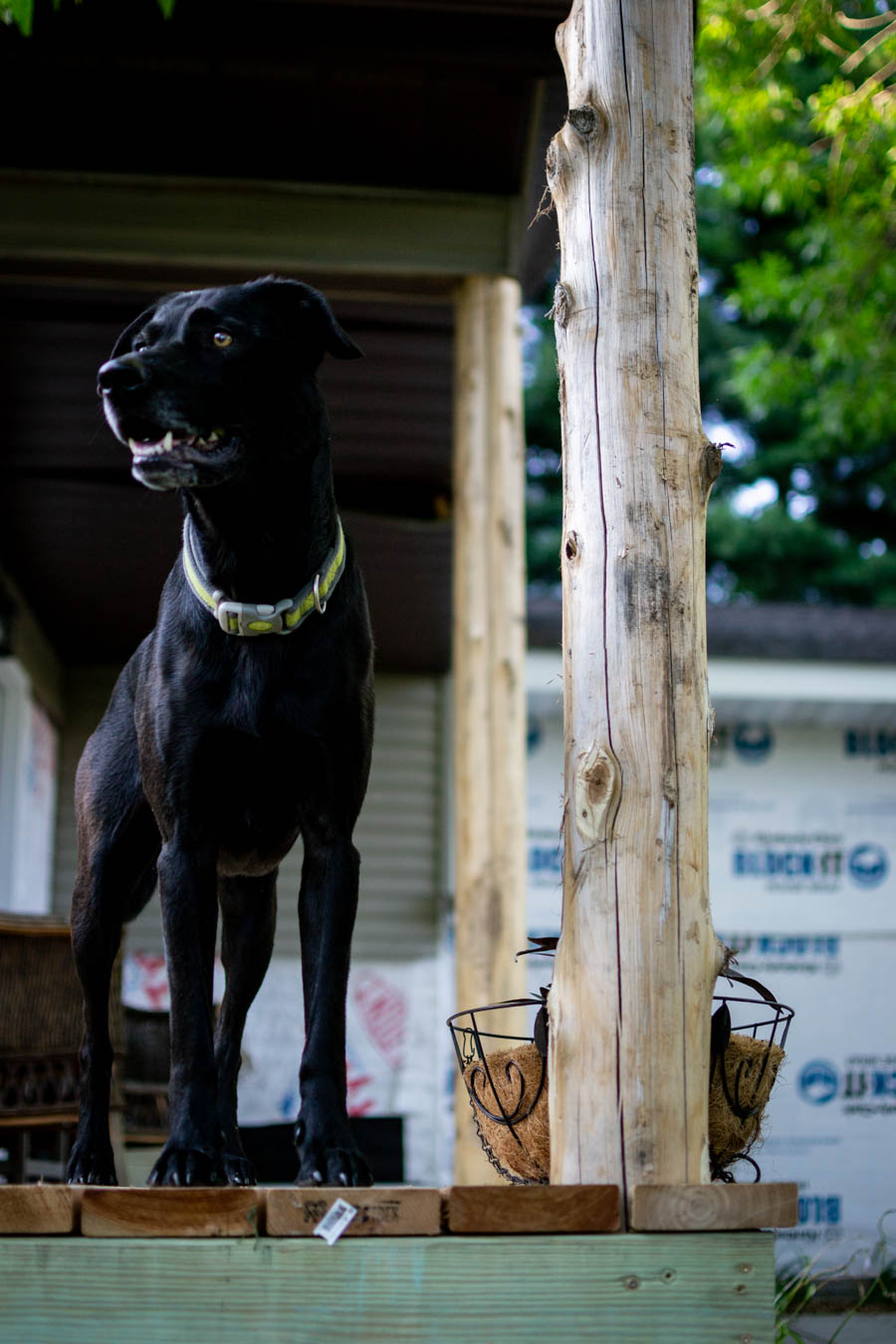 Thankfully, the front porch was a little quicker than the retaining wall and took about seven days from demo to almost finished. We still need to install the stairs and add a railing on either side of the extended portion. We opted for no railing along the front to keep it nice and open. 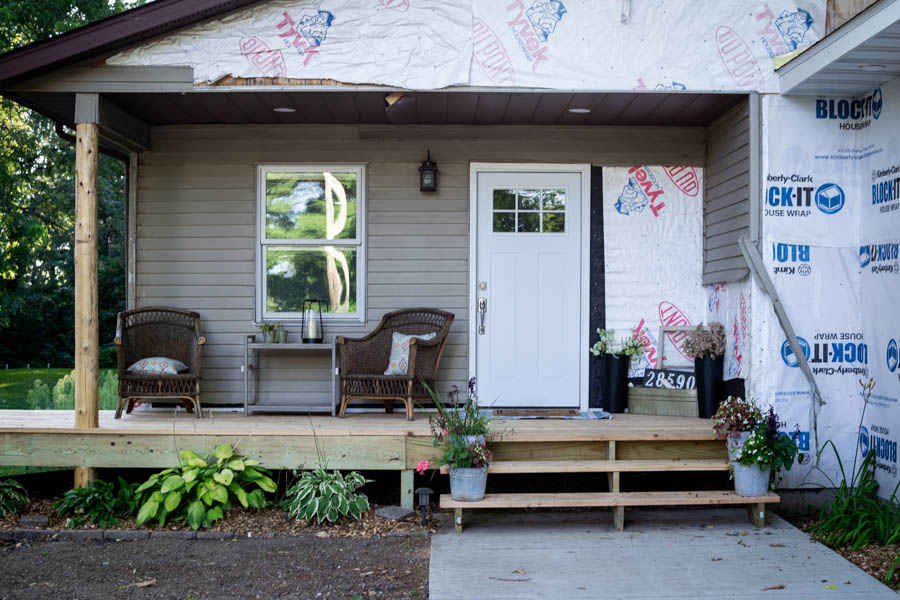 And there you have it – a new porch and a new retaining wall. The two major projects we wanted to complete this summer… and they were actually done on time! And bonus, the dogs have a new favorite hangout spot 🙂 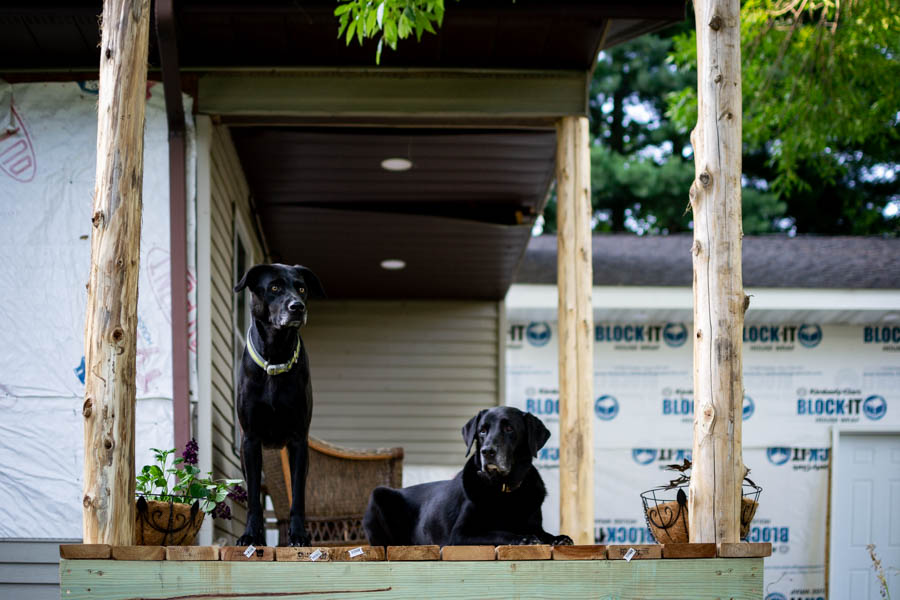