Add rustic charm to your home with this easy-to-follow DIY tutorial on how to install a barn wood wall.

When I first mentioned to Brett that I wanted to do a plank wall, I pictured us channeling our inner Chip and Joanna Gaines and doing the whole shiplap thing.

Brett had other plans. 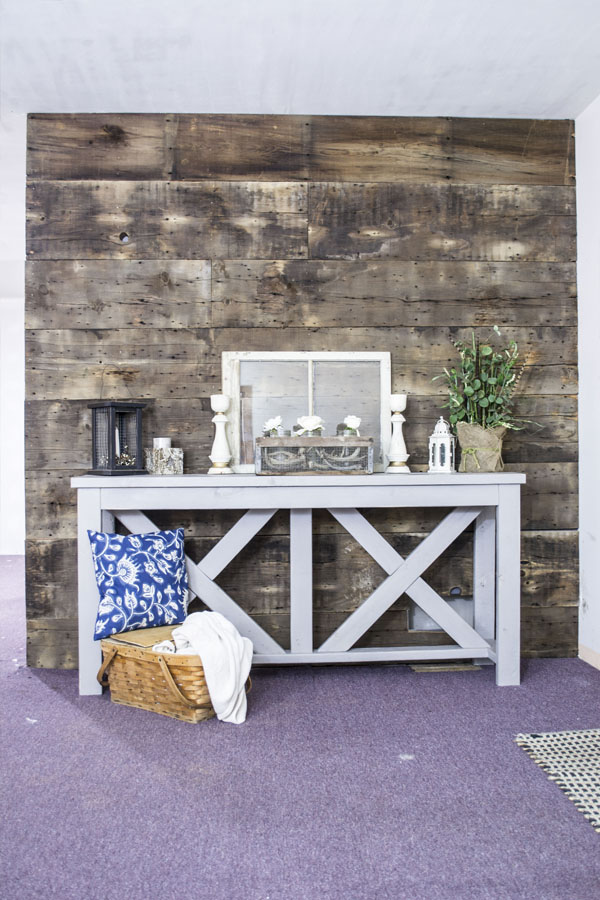 “Hey babe. I think I found us some real barn wood.” He says to me one day.

“Well, I was driving home from Menards and just stopped at this guy’s house and asked him if we could use some of the wood from the collapsing barn in his backyard. He said he wanted the whole thing gone, not just bits and pieces. I told him we could do that, but it might take a little while.”

Who was I to argue with that? Only my fiance would just stop at some stranger’s house and ask them if we can take some barn wood. One of the many reasons why I love him so much 🙂 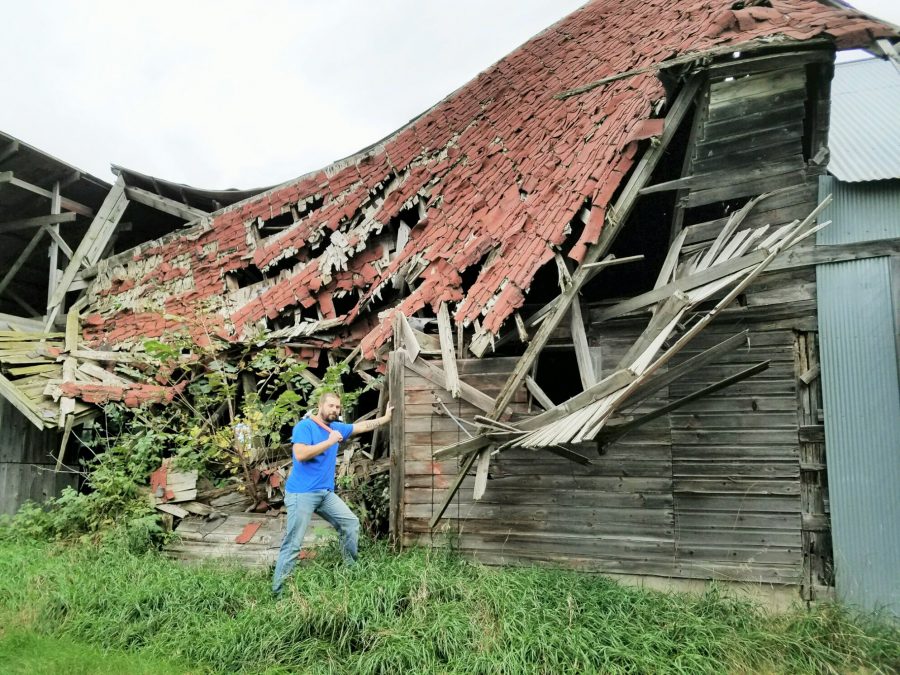 Later that week, we drove over to the barn after work with just two hammers and a crow bar and started taking down the wood.

The owner said it was there when his family bought the place in 1940, so it has been there for a little while. As you can see from the picture, it was time to come down.

We learned pretty quickly that we needed something a little more powerful than a hammer or crow bar and weren’t able to get too much wood the first time around.

We made anther trip back a few days later, this time with reinforcements in the form of a chainsaw and sawzall. 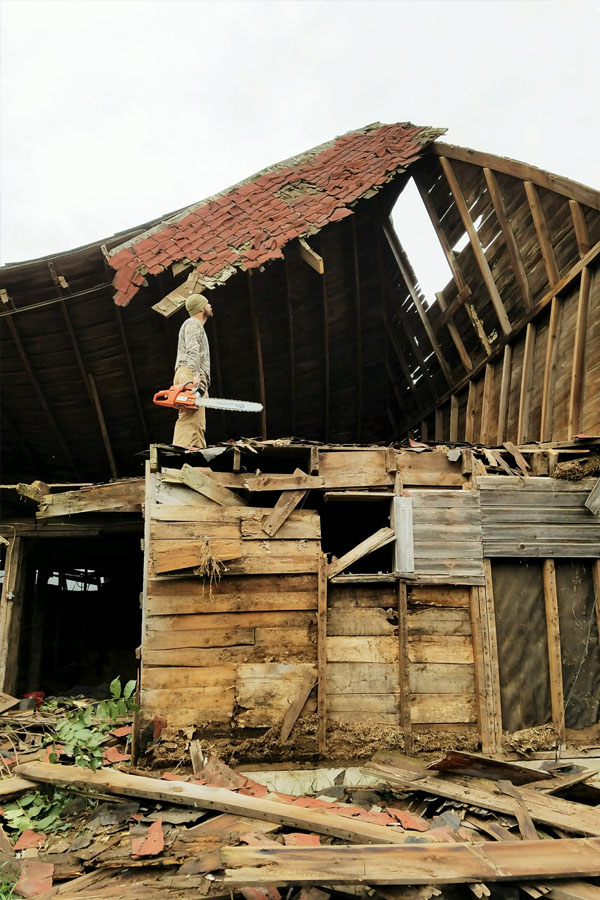 Brett was bound and determined to get the roof down, because that was where all the “good” wood was hiding. 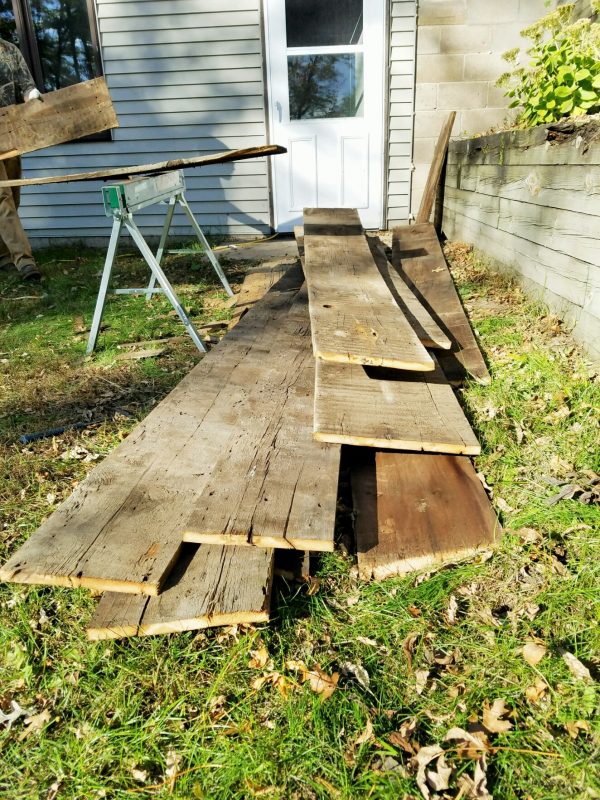 After about three hours, we had taken down enough wood for the wall and the roof was nearly down. 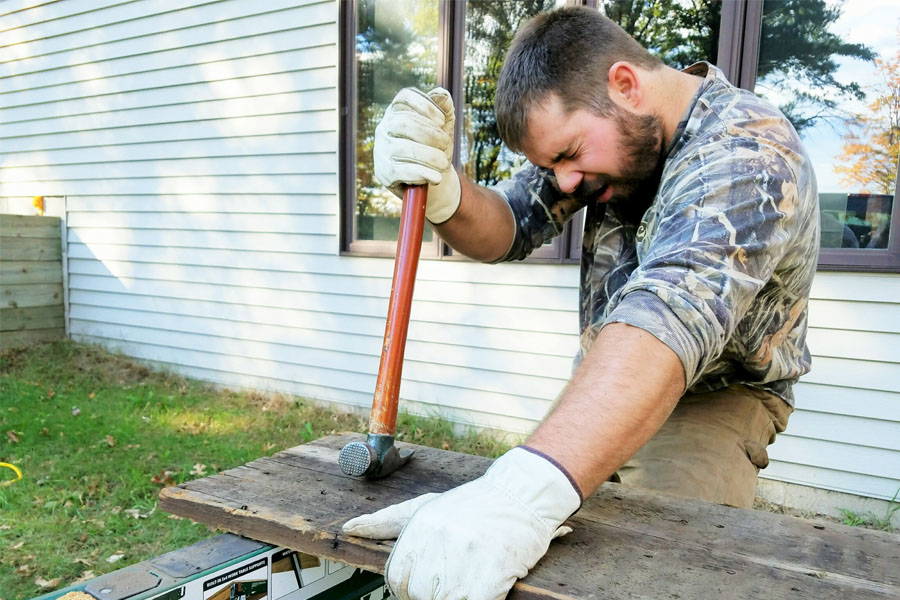 When we brought it home, took out the big nails and folded over the small ones. We liked the look of having some nail heads in the wood and thought it added to the character. 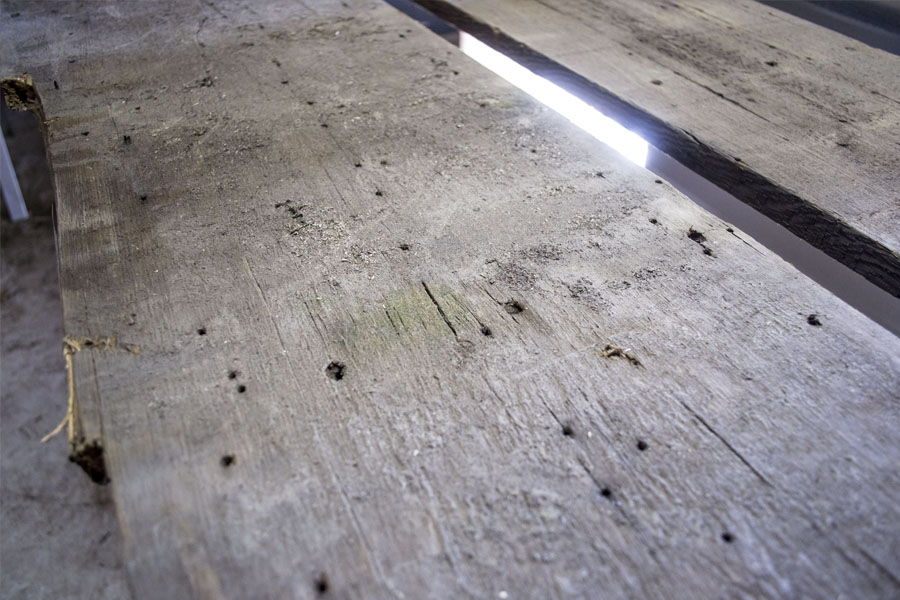 To clean it off, we scrubbed the wood with a wire brush over the surface that would face up. I didn’t press too hard because I didn’t want to scratch the surface or ruin the wood. 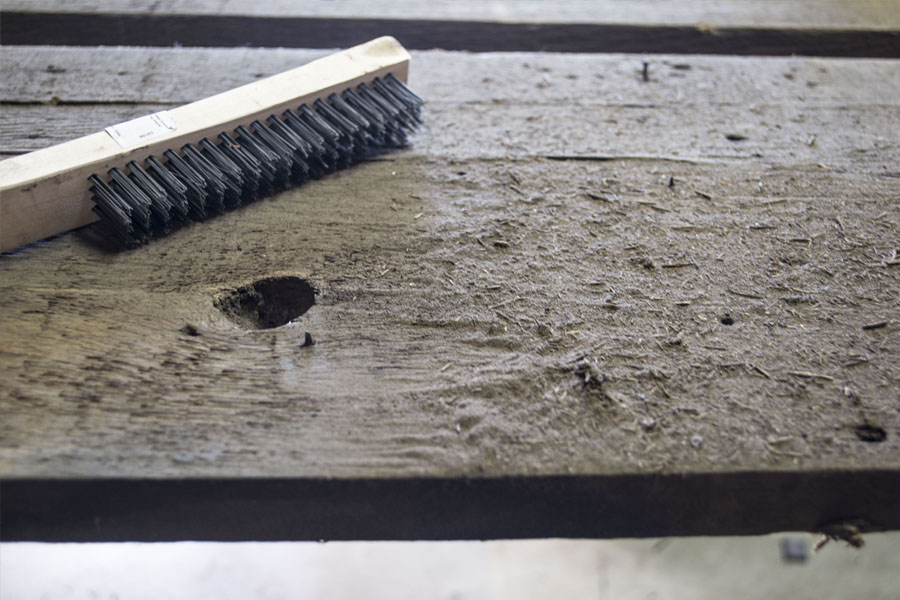 After cleaning with the wire brush, we took a broom and swept off the front side to remove the settled dust.

Now to place on the wall.

For the pattern, we either used the whole piece, pieces cut in half or one side with 1/3 and the other side with 2/3.

A few days prior, Brett got a new nail gun and compressor. The nailgun jammed once and we had to tinker with the pressure on the compressor, but overall everything worked really well. 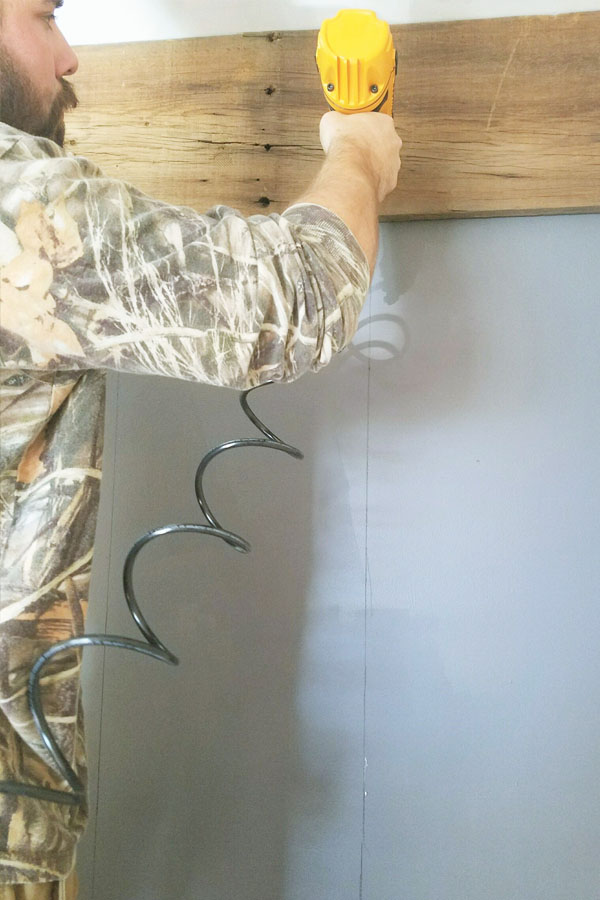 Before nailing the wood to the wall, Brett marked where all the studs were with a permanent marker so we had a secure backing for the nails. 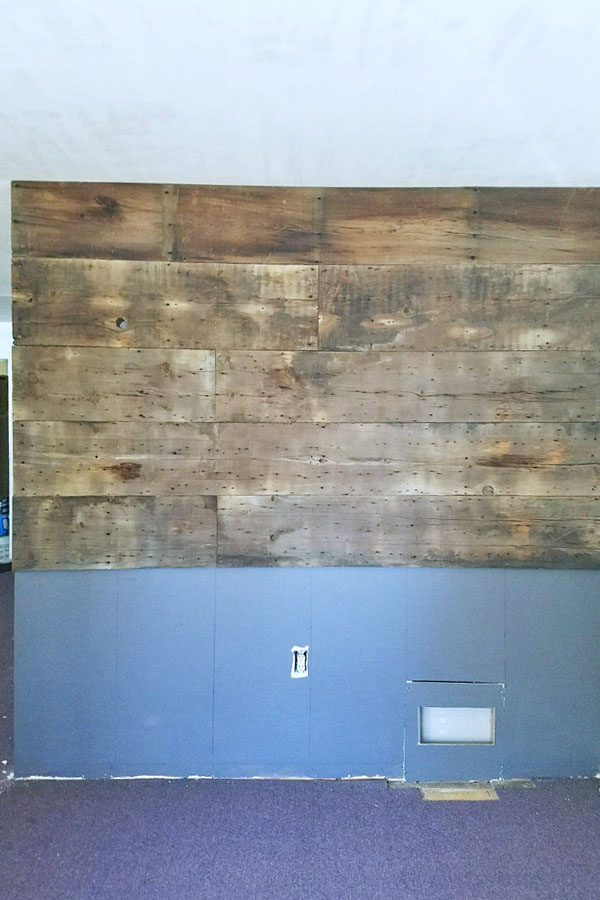 We started from the top with an entire board and then worked our way down. We got on such a roll that we skipped a few rows of measuring to make sure it was straight. When we got down to the last three rows, we had to overcompensate the other way to make sure everything was lined up correctly.

We cut out holes for the HVAC vent and electrical outlet before nailing those boards to wall. 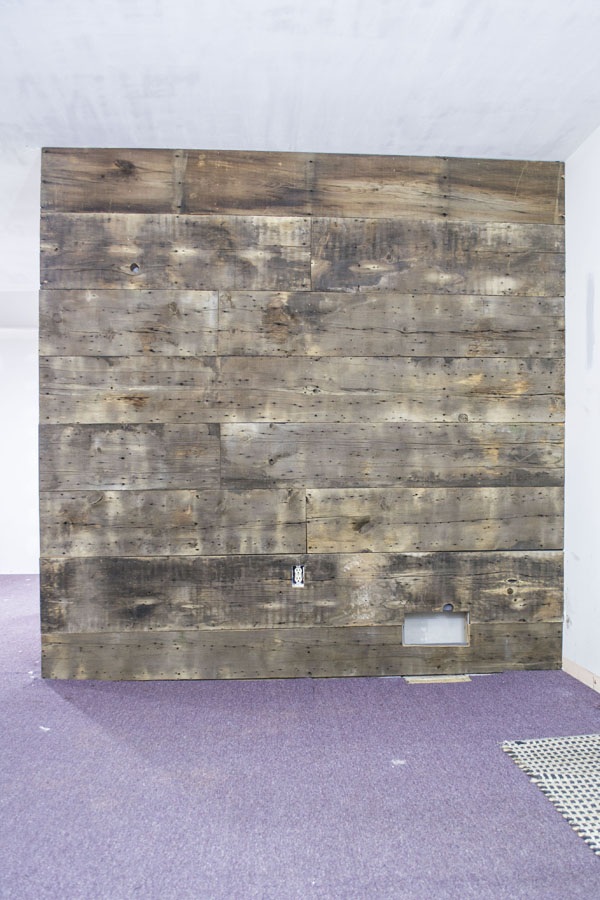 I went back and forth on covering it with a clear poly coat, but decided to leave it alone  for now. We’ll see how it holds up and maybe we can add something later. 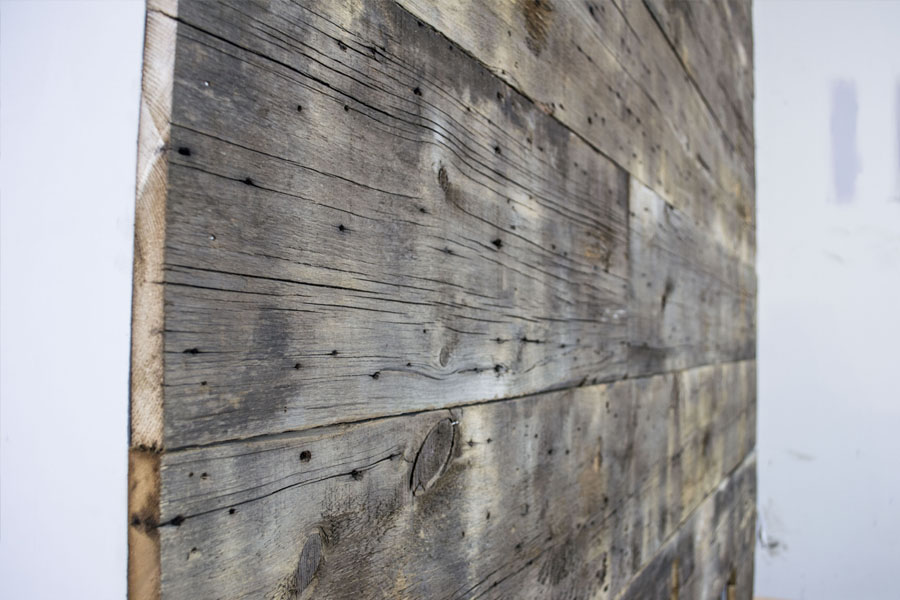 The last step was going over all the boards with a vacuum. Yes, we vacuumed the walls. 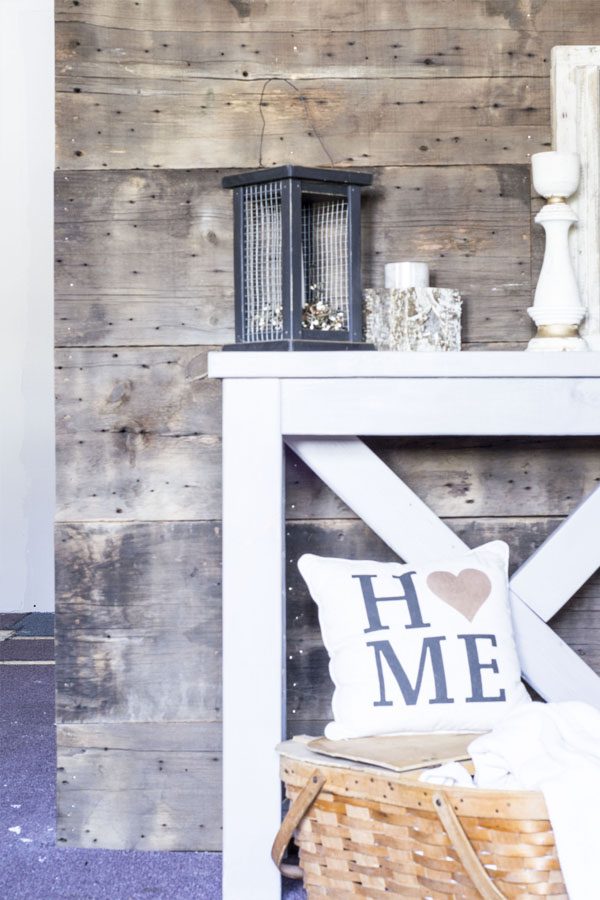 Is it weird that I want to sit in front of this wall and look at its beauty all day?

Maybe, but I don’t care. Brett will be right next to me, so we’ll be weird together 🙂

And as always, if you need more ORC inspiration, check out the other guest participants!

Week One: The Front Entryway

One Room Challenge Week One: The Front Entryway

One Room Challenge Week Four: The Lights & The Window
Previous Post: « The Candle House Tour
Next Post: How To: Pumpkin Succulent Garden »