Before we jump into the nitty gritty of this rustic recipe board DIY, we need to start off with this disclaimer: it’s quite tedious, as in it’s been in the works for about a month.

With that said, I am SO excited to share the tutorial.

But first, the inspiration.

Last May-ish, I discovered Thistlewood Farms and immediately fell in love with KarieAnne’s writing and design style. Then, I stumbled upon a tour of her kitchen and I saw this beautiful recipe board that doubled as a plate holder. I frantically searched for the tutorial, found it and added it to the ever-increasing, ongoing list of DIY projects we want to tackle in the near future.

Fast forward to the beginning of December and we FINALLY purchased the plywood to start this baby. 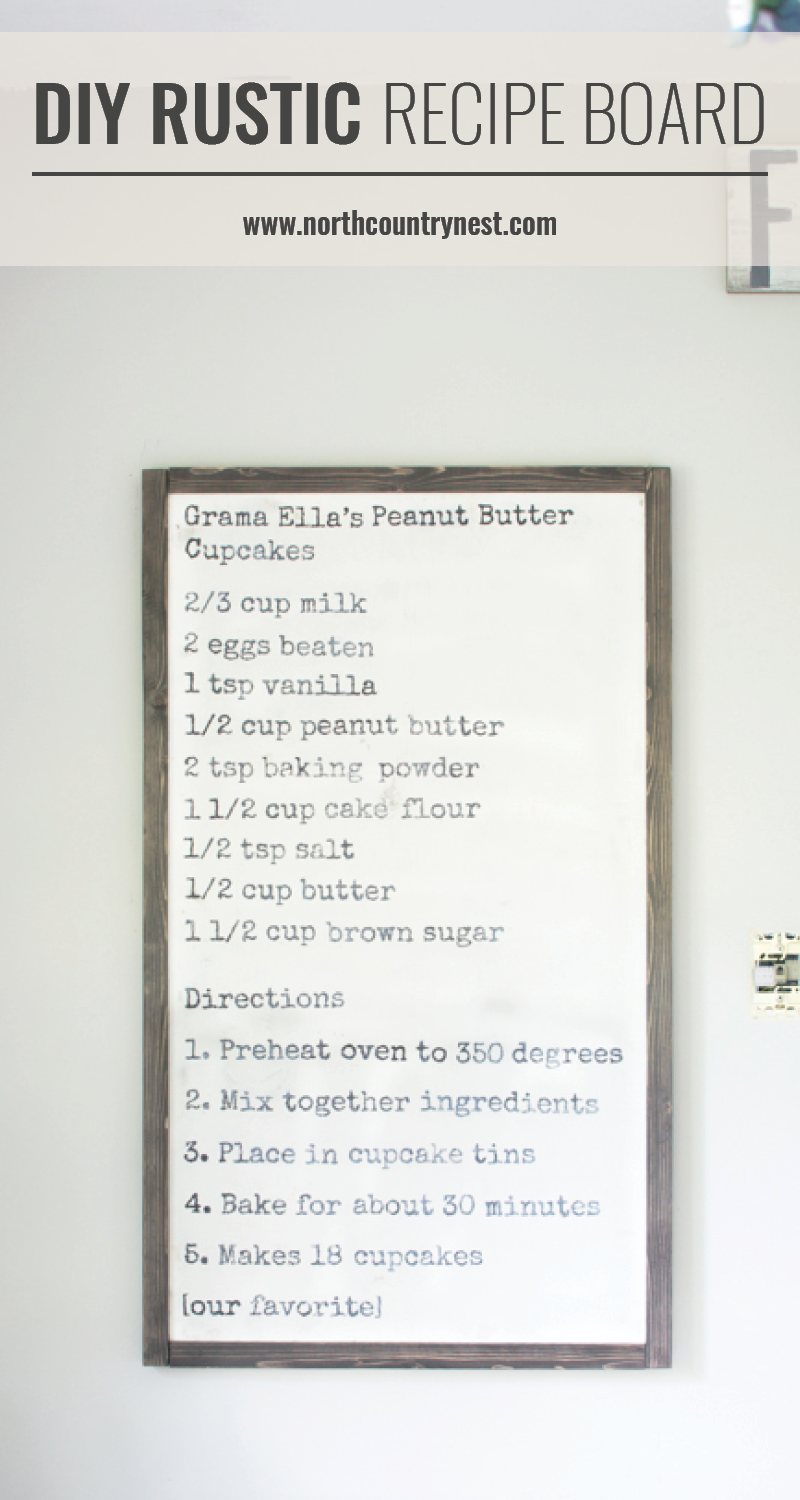 [this post contains affiliate links, which means we may make a small commission if a purchase is made. see the full disclosure here.]

Supplies for the DIY Rustic Recipe Board

We cut the board to the size we wanted, I sanded it down and applied three coats of paint.

Then it sat… and sat. Alone and neglected.

For good reason, I promise – I couldn’t figure out how to transfer the lettering to the board.

Yes, I could do the method I used to make this sign – but my hand cramped up so quickly and the lines are a little hard to see, especially in the evening without natural light. 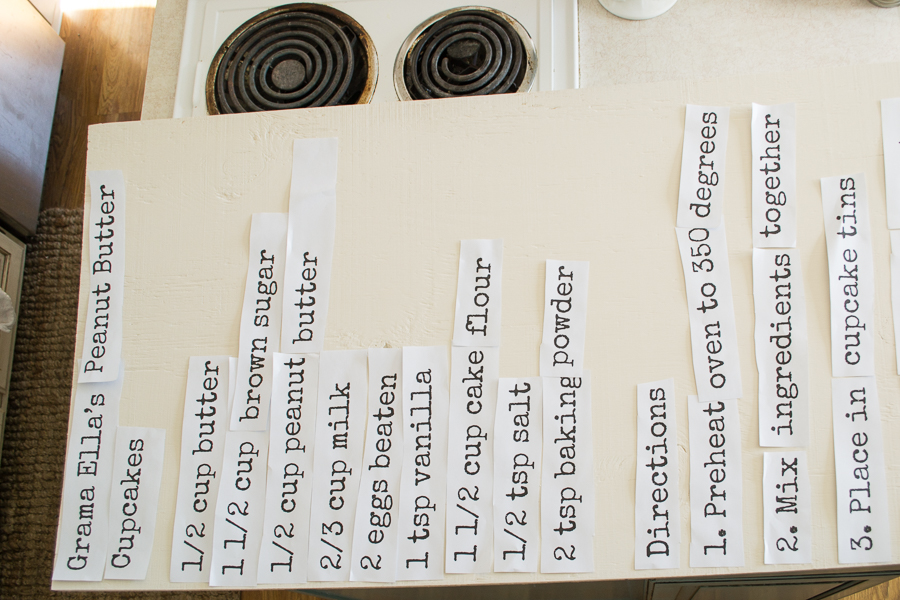 Thistlewood Farms’ tutorial said something about transferring vinyl lettering, but that didn’t seem feasible because I don’t have a vinyl cutter.

Then I came across this post from 1915 House about transferring images with contact paper and I thought hot damn, this is the answer to my problem!

I picked up this carbon paper, printed out the lettering, taped the lettering to the contact paper [make sure the carbon side is face DOWN… made that mistake more than once.], tape the lettering-contact paper combo to the plywood and trace to your heart’s content. 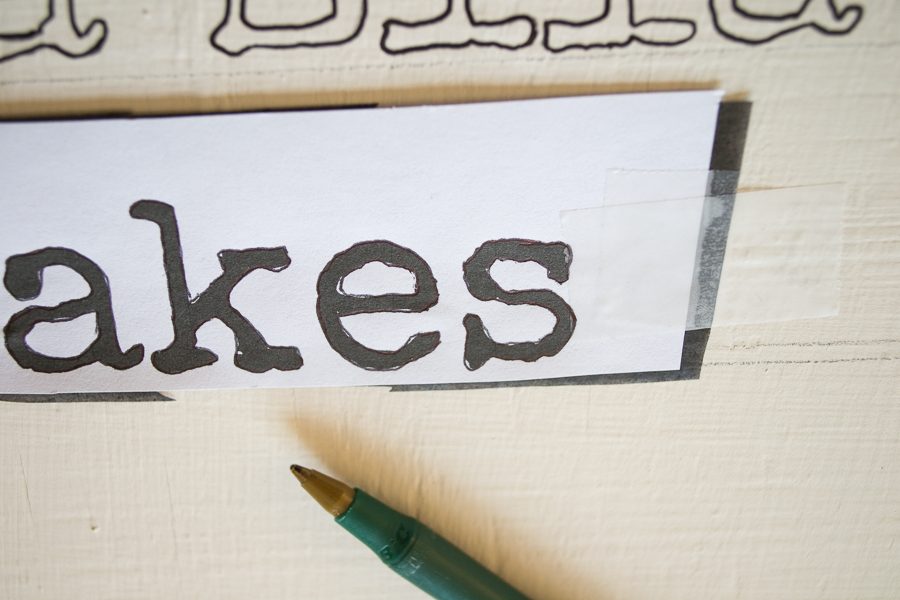 This was tedious. This was not really that good of a time.

However, I found it goes much faster when you sit your butt in front of a good show on Netflix and just zone out.

After all the carbon paper tracing is done, remove the paper and you’re left with a beautiful and accurate outline of the lettering. 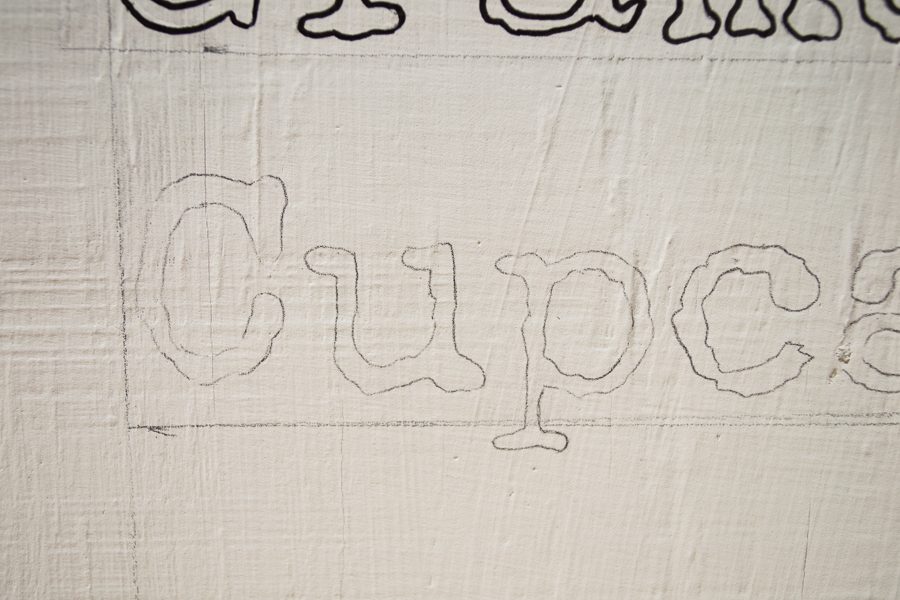 Don’t get too excited, because you still have to go over it oneeee more time with either paint or a paint pen. I chose the latter and I can’t scream it from the rooftops loud enough that paint pens are a gift from craft heaven.

I had such a hard time painting in between the lines and making sure everything was accurate and evenly covered.

With the paint pen, it goes on like butter and is SO evenly distributed. After tracing everything a second time, I went back and forth for about a day about whether or not I wanted to color it all in.

I decided I could give it a test run on the title and even before I finished the first letter I knew I they all needed to be filled in.

So, I found a new show on Netflix, parked my butt in front of the TV and proceeded to color in every. single. letter.

Then I brought the finished product downstairs to lightly sand and distress it to give it a more farmhousey-rustic feel. 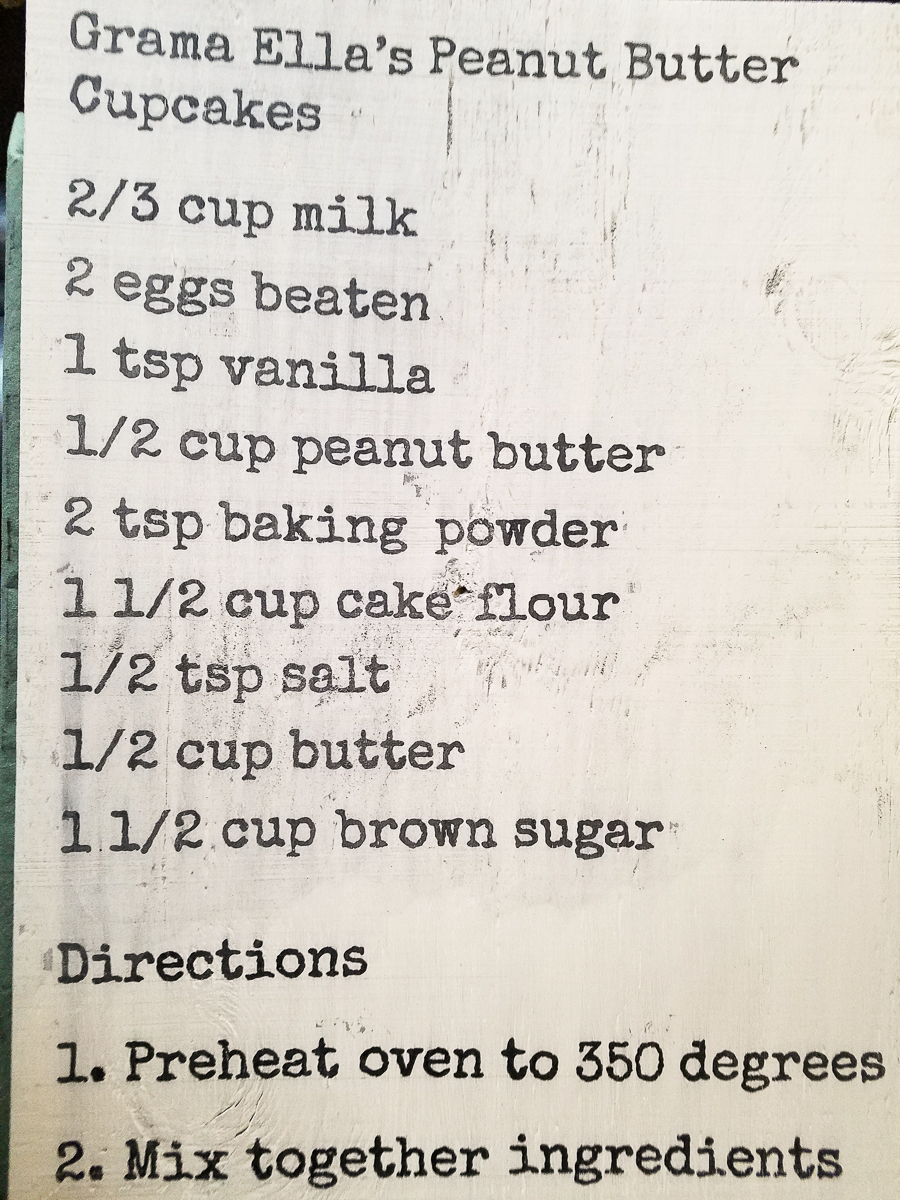 Only, it smeared. And not the good kind of smear that makes it look cool.

The bad kind of smear that looks messy and childish. 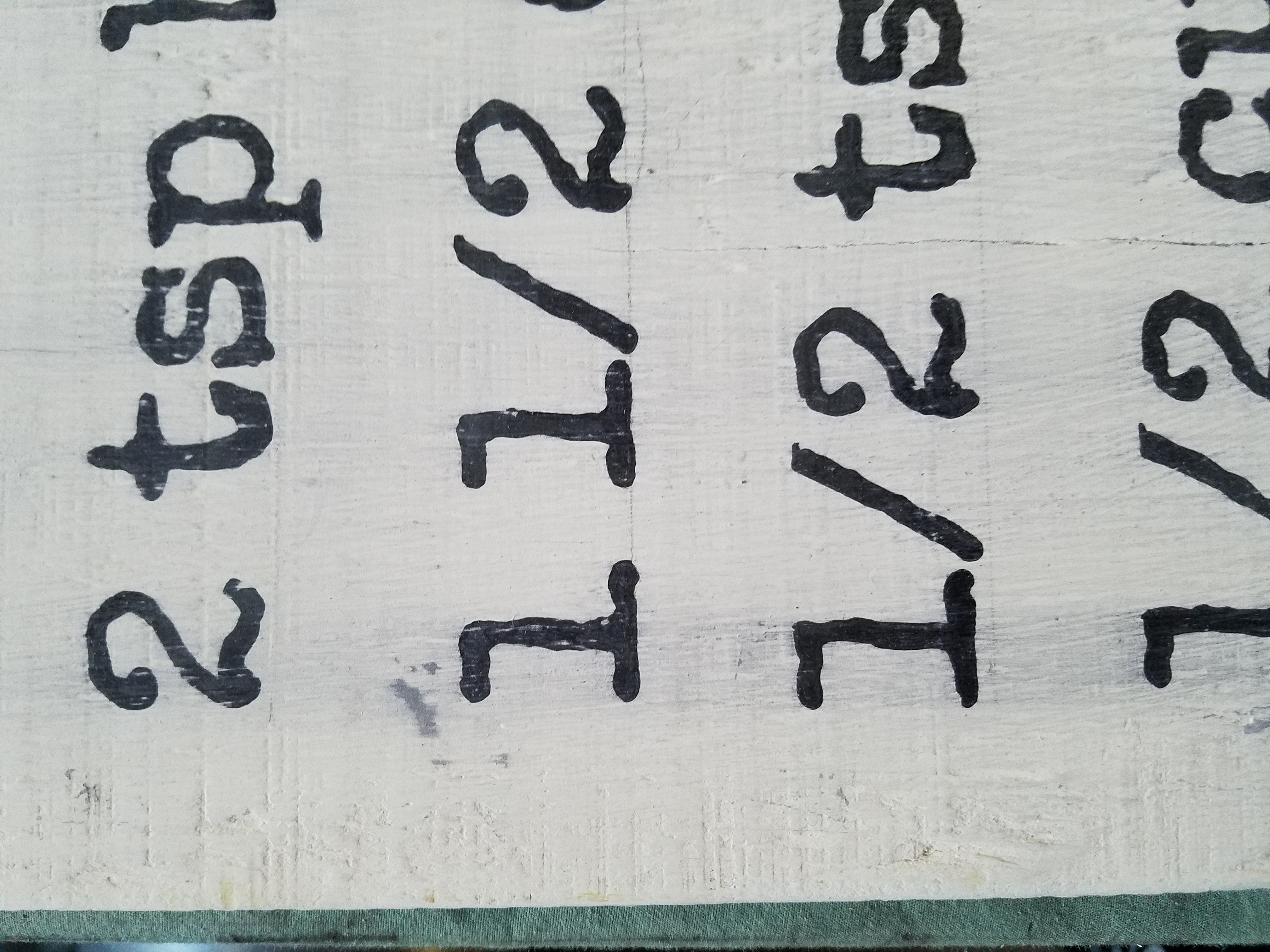 So I grabbed a paper towel and tested wiping it all down with water.

This kind of worked. I guess enough to haul the sign back upstairs, grab a dish cloth and a cup of water and very carefully wipe away the smears and smudges.

This is tedious. Even more so than tracing and coloring every. single. letter.

After cleaning up the sign as best I could, I brought it back downstairs for a coat of spray paint polyurethane – quick before I accidentally smeared it again. 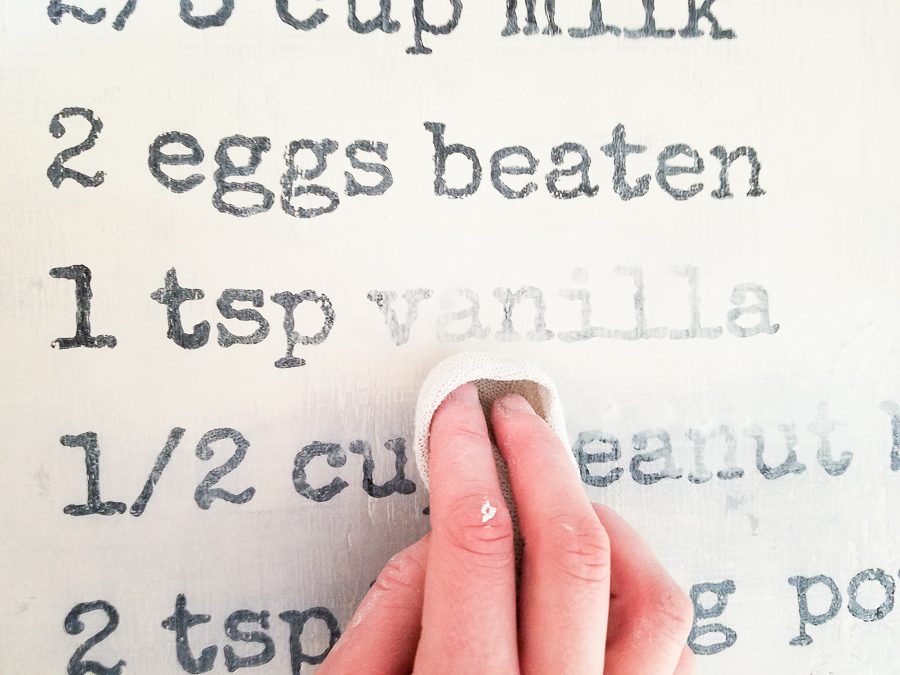 Then I called on Brett to help me add a frame.

We tried one way and it didn’t really look that great. Then we tried another way and knew almost immediately that it wasn’t going to work.

We walked away from it for a bit to think it through.

About three hours later Brett comes up with this great solution. 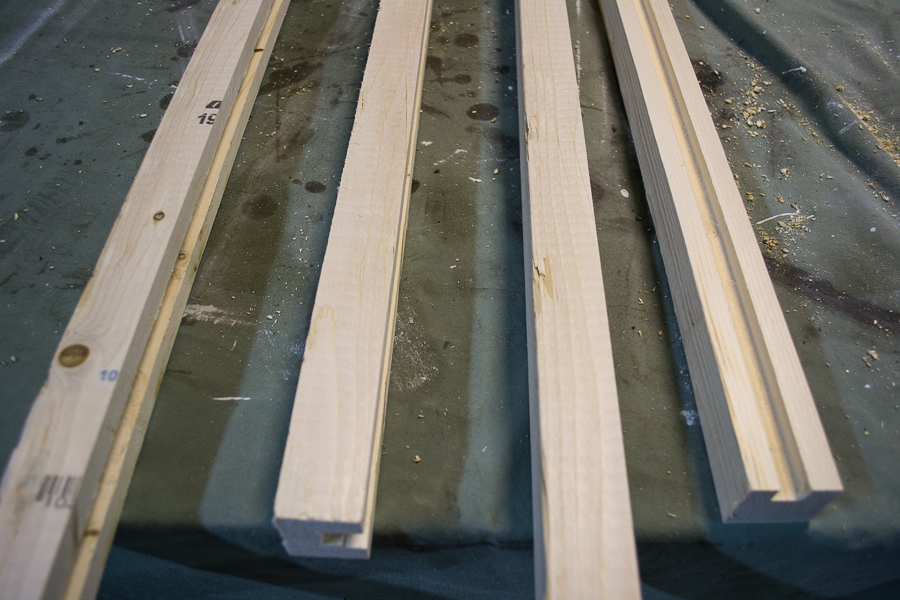 He cut a long line down the middle of a piece of wood so it created this notch for the frame to go inside. I’m almost positive this has a real name, but we’ll just call it the notch frame.

After he completed each side of the notch frame, I sanded it down with 120 grit sand paper and gave it two coats of stain in espresso. 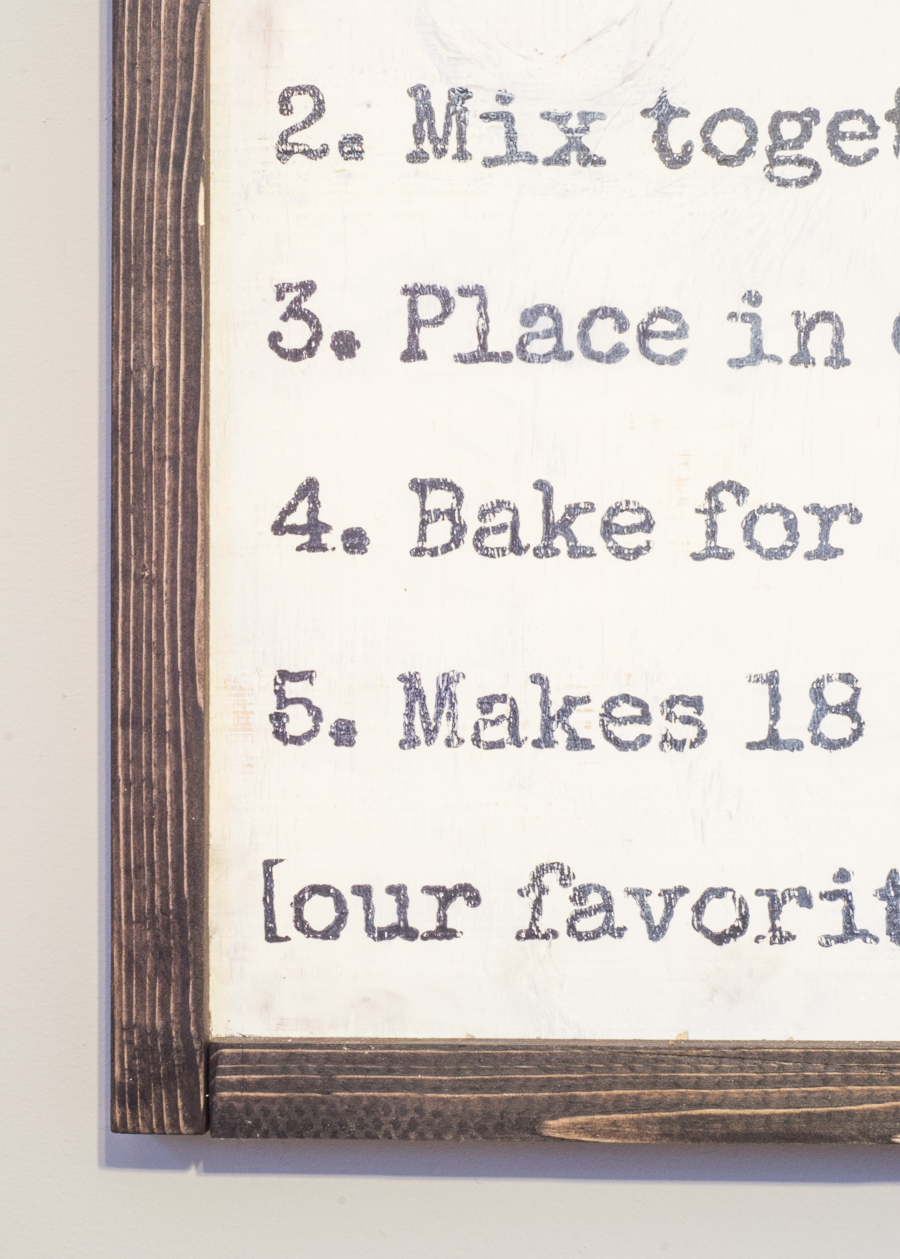 Then we glued and stapled the frame onto the recipe board, added a saw tooth hook to the back and put that baby in it’s rightful place on the kitchen wall. 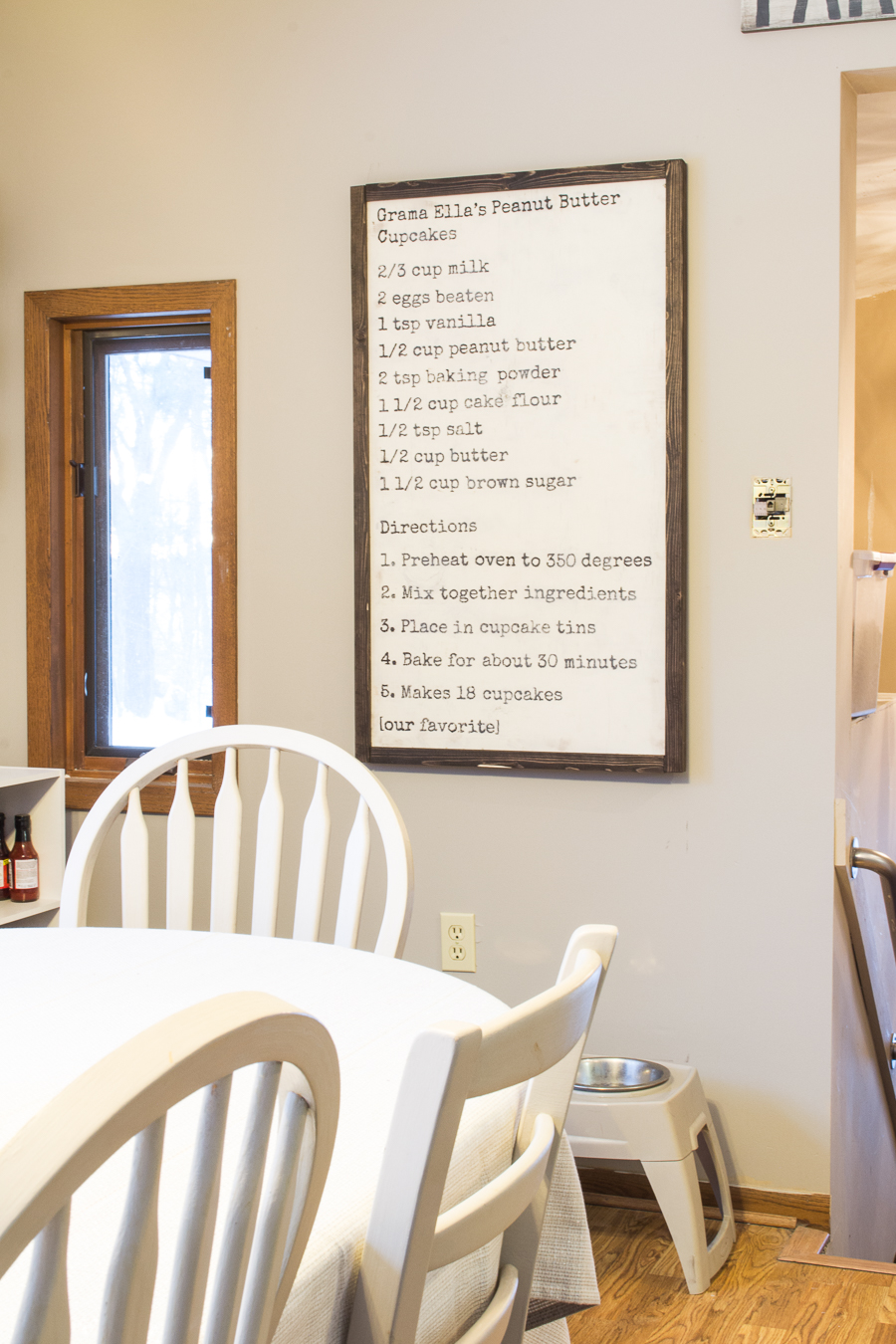 Then we called it a day and started a new show on Netflix.

When the Table Makes the Kitchen