We’re at the halfway point, friends, and shockingly enough, I’m feeling rather organized in terms of the to-dos that are left for completing everything.

Dare I say we may actually get this whole baby done on time?!? 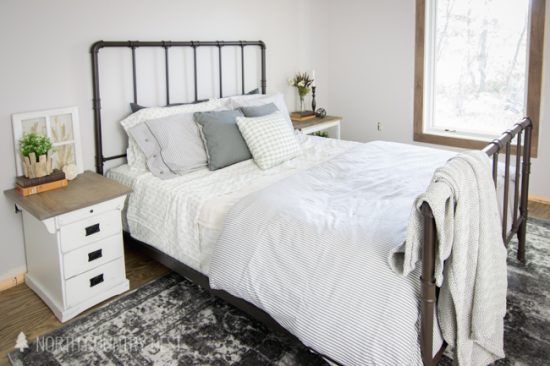 This week’s update is all about the rustic farmhouse guest bedroom decor staples – bed, bedding, rug, and nightstands – and how things don’t always work out as planned.

If you remember back in week one, I talked about making over two stepladders into functional nightstands for either side of the bed. I even found two at an antique yard sale that were pretty similar in size and look. It was as if the gods were intervening and as determined as I was to have this work out. 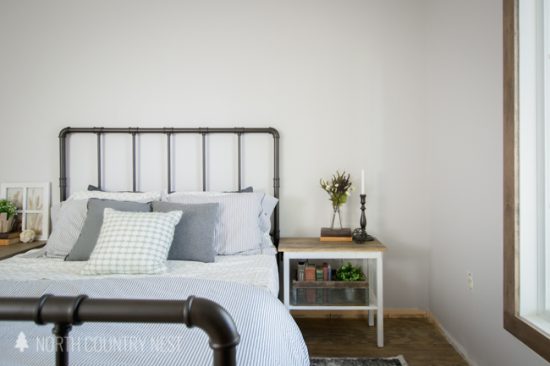 And then the first roadblock came appeared. I put the ladders on either side of the bed and it was clear they weren’t going to work – they were way too small and seemed to dwarf even more so in comparison to the bed.

Hello, plan B. I quickly began researching nightstands, trying to find something within our budget. I also hit up the usual thrift stores and antique shops but came up empty-handed. 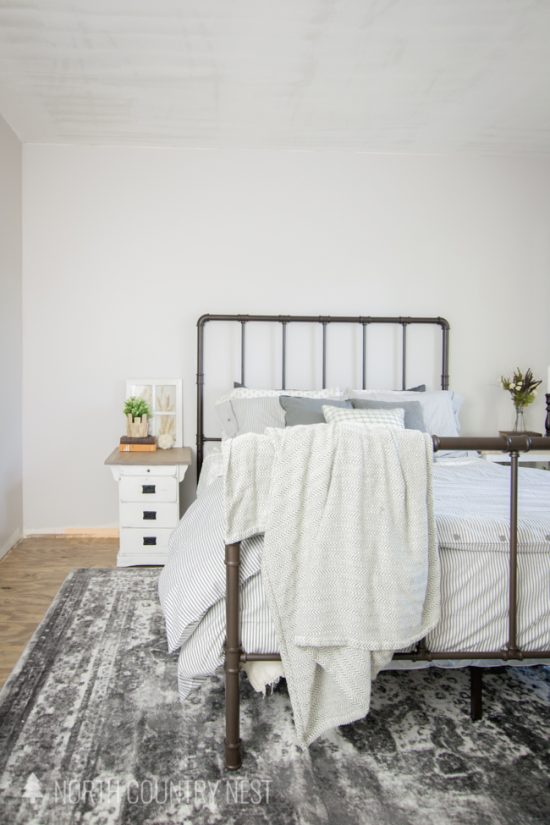 About a week later, I had an epiphany and remembered we had two small tables  (from previous DIY’s I kept ‘just in case’) that might work – a farmhouse style side table was in our entryway and this nightstand was hanging out in the other guest bedroom, collecting dust.

What do you know, they’re perfect. And free! 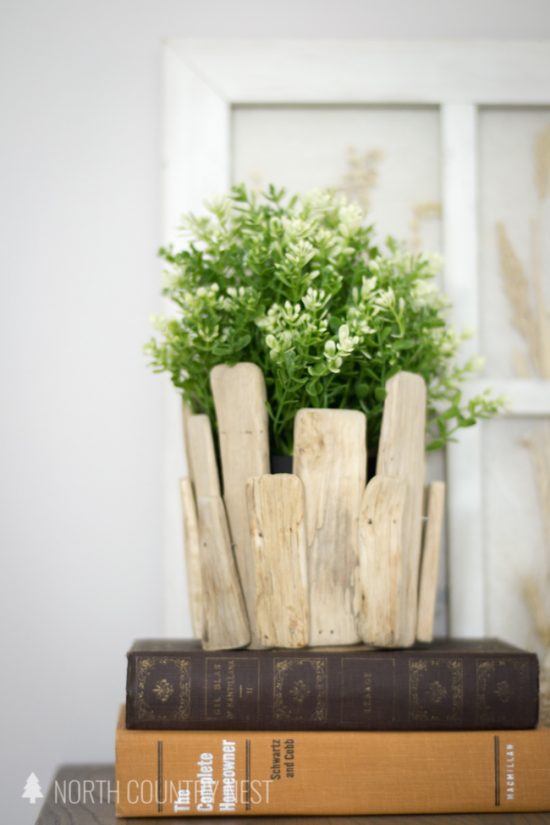 Next up was the bed frame and bedding.

The bed was purchased wayyyyyy back in the spring as one of those, “We have some extra money and we’re going to need this eventually, so let’s get it now,” purchases. Birch Lane listed the bed as a ‘dark bronze’ but the pictures looked black so I decided to give it a shot. 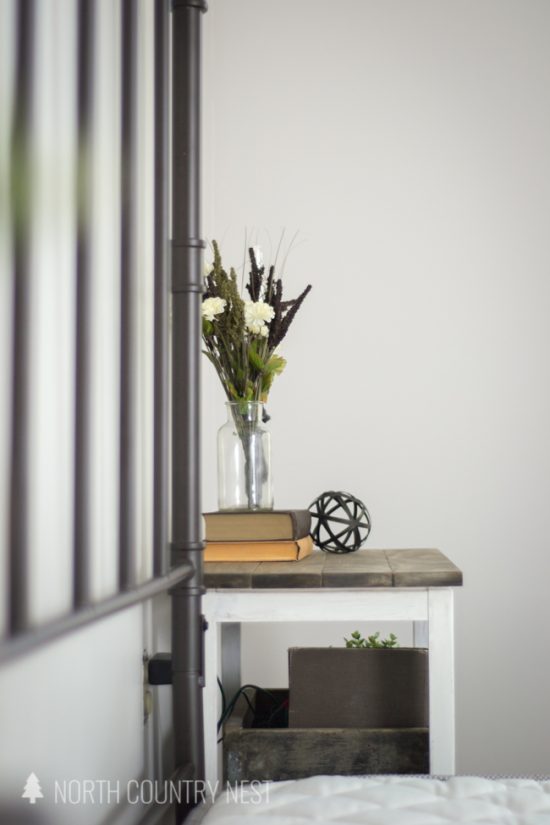 I definitely should not have been surprised when I put it together and realized the bed was indeed a dark brown. Apparently, too much time passed and I ended up going back to the records and combing through all the product information with a fine-tooth comb to see if I needed to write a strongly worded letter to the company.

Spoiler alert: I purchased the one titled ‘dark bronze’ and if you zoom into the picture, you can tell that it has a hint of brown. 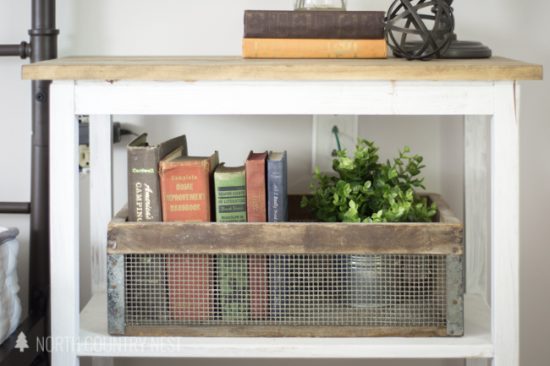 I’m debating whether or not to spray paint the entire thing black so it matches the other hardware in the room, but my motivation to do that was thrown out with the bed packaging and I haven’t been able to bring myself to strip off the bedding, maneuver off the mattress and box spring, and haul the bed downstairs to spray paint. I’m exhausted just typing all that out 😉 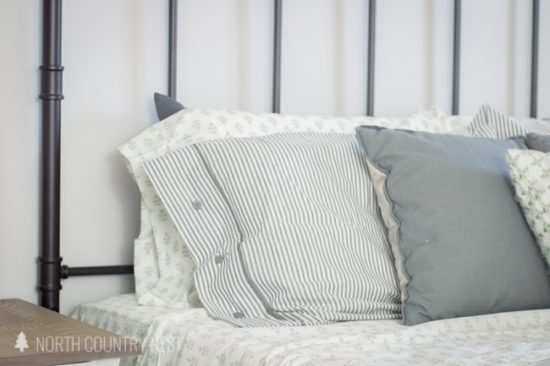 For the bedding, I had the sheets on hand that I knew I wanted to use; we got them as a wedding shower present back in June and they’ve been waiting to see the light of day since then.

The comforter was another story. I went back and forth about purchasing a new one or reusing something we already had on hand. While on vacation this past weekend, I even put a duvet in the shopping cart, ready to purchase after I showed it to Brett when I got home. 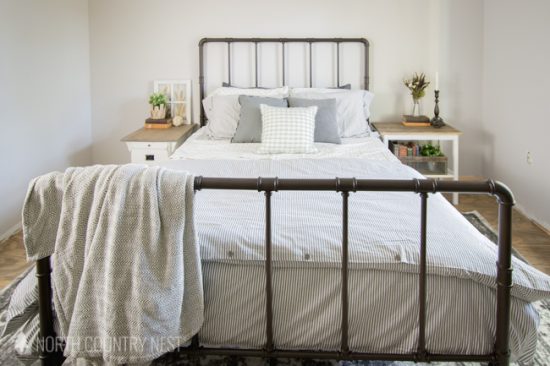 And then I went back through our linen closet one last time on Sunday evening to see if I was missing anything. Imagine my surprise when I saw this striped duvet cover I had purchased several months ago off Amazon, still in its beautiful package, untouched. Apparently, I was totally on my A-game last spring and no, I do not have a hoarding problem. It’s called being well prepared. 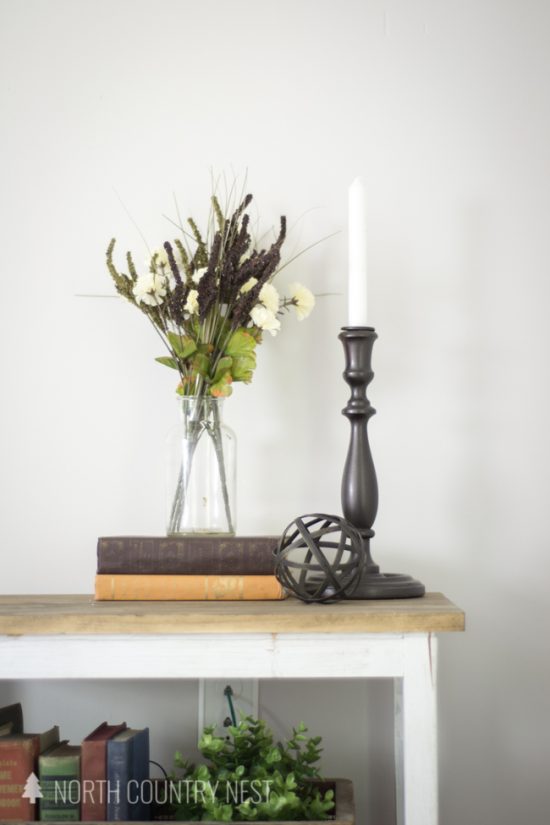 The last adventure in decorating for this week’s reveal was the area rug. Finding an area rug that doesn’t cost an arm and a leg…and another leg…is quite the challenge.

My first tip, which seems rather obvious and silly to type out, is to MEASURE. Yes, I know you’re saying something along the lines of, ‘duh,’ but hear me out. I thought we needed a 9×12 rug because I wanted enough of the rug showing on either side of the bed. So I spent the first three nights searching for that size, becoming more and more frustrated at the lack of options and the increasing price tag. 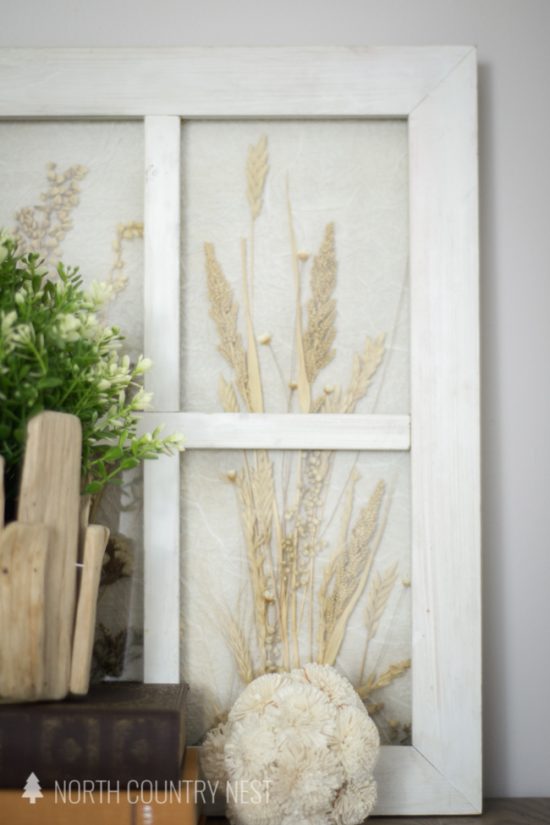 On day three I became so mad that I got off my ass and measured the room to see if that really was the right size and what do you know? If we had purchased a 9×12, our entire room would’ve been covered and all that work we did on the beautiful plywood floor would have been covered. 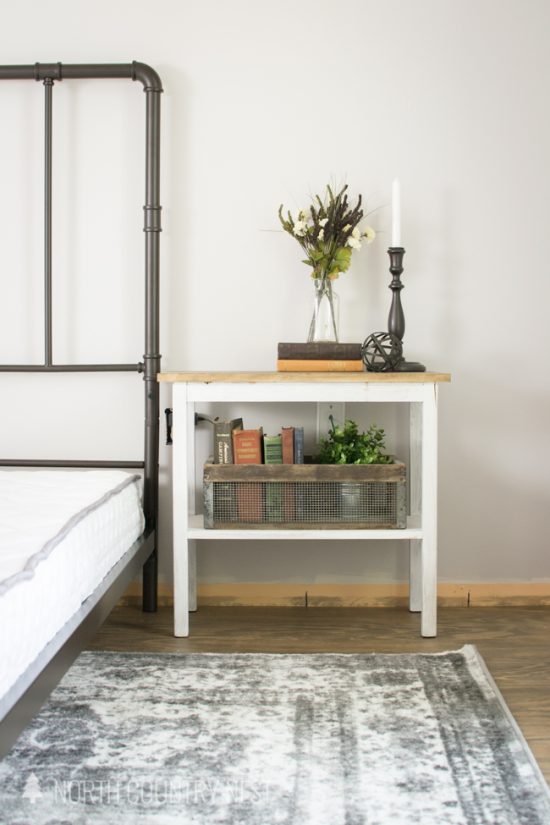 You might think you know what size you’re going for and perhaps may be too stubborn to want to check but I urge you, just get out the damn tape measure. 🙂 You might even save yourself a few hundred bucks in the process, since that seems to be the price difference between an 8×10 and a 9×12. 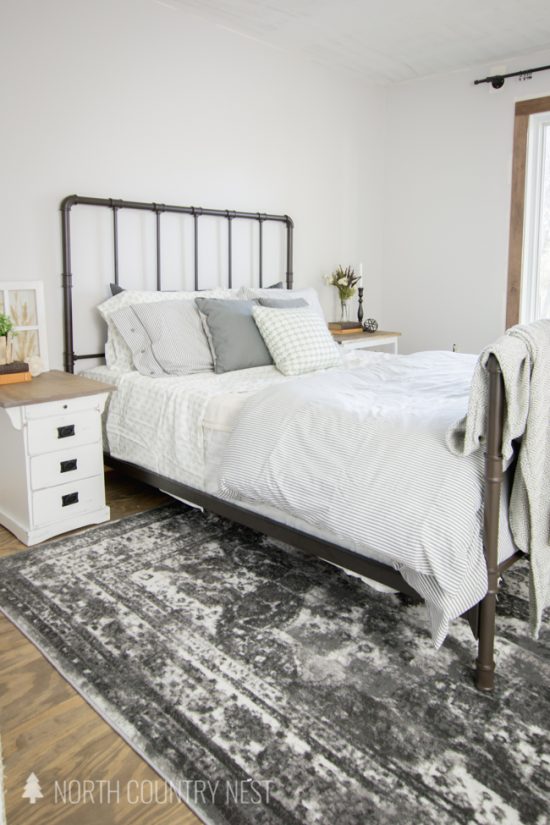 If you need to catch up… Catch up with all the other participants by clicking here!

Next week we’ll be sharing how we install the bedside lighting, the plant shelf and (hopefully) finishing up on the painting so we can hang the curtains.

P.S. This is what happens when I try to take pictures of the bedroom without putting up the baby gate. They’re such great helpers 🙂 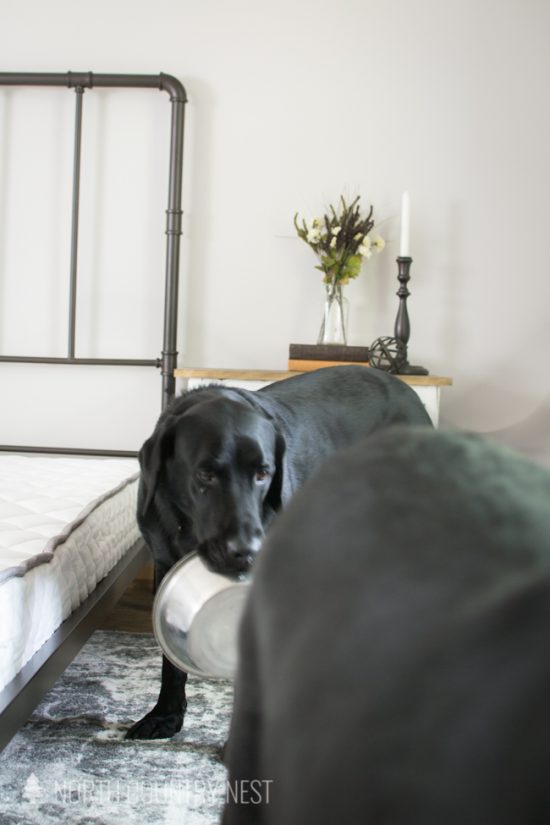 PP.S. I created the most GENIUS way to hide the internet router from guests – cut out the book pages and wrap the cover around the router. Awesome, right?! 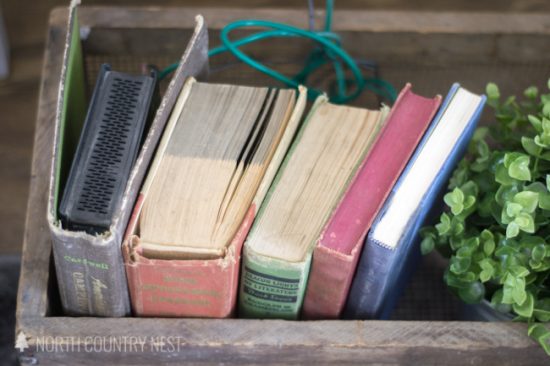 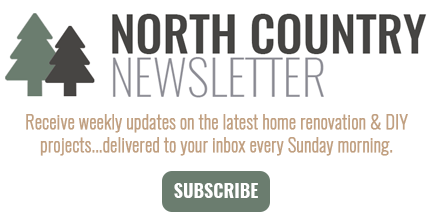