We haven’t done this before but I thought it would be fun-ish to have a mid-year check in on how the projects are coming along. And of course, in true North Country Nest fashion, plans change. Not only are we walking through the list from January but we’re also giving sharing what’s been added. Because we just can’t leave well enough alone!

We are so unbelievably close to finishing this renovation. I know we had hopes if wrapping this up in March (ha!) but like every other project in this home, it’s taking a lot longer than we anticipated. 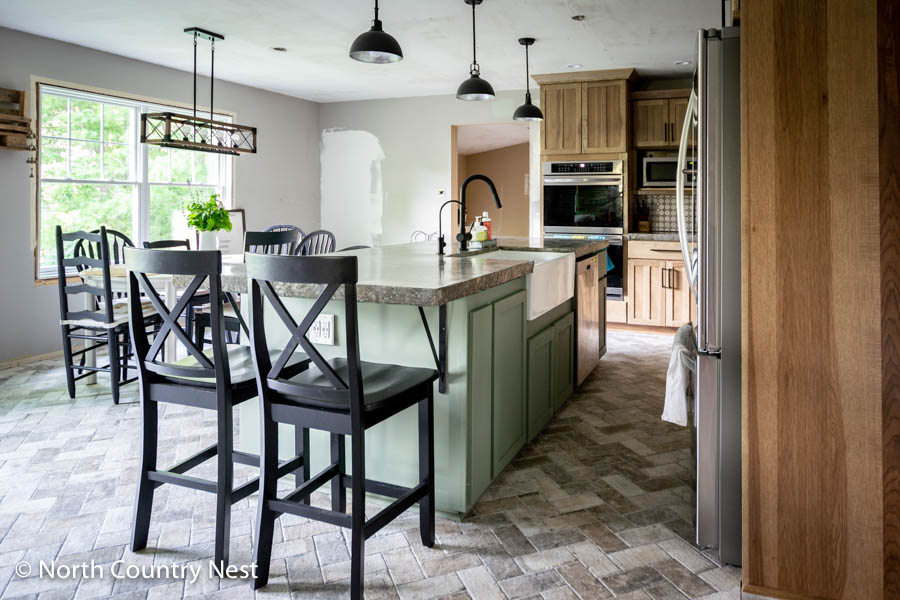 Yes, there have been a few project-specific setbacks (hello, dried grout) but in actuality, we’ve been trying to be more intentional about balancing projects with life. 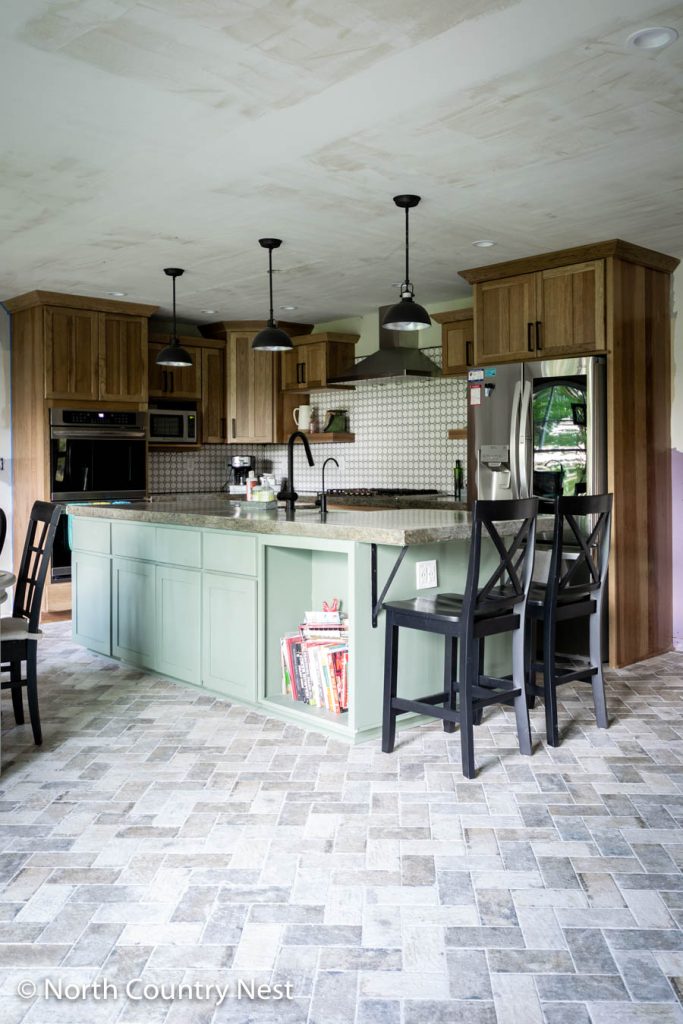 It’s easy to get sucked into the mentality of not doing anything fun or “selfish” because you want to get a project done. Well, I’ve started to call BS on that idea. Yes, it would be great to have the kitchen done already. However, it’s not worth happiness and sometimes, you just need to take a step back and do something else. The tradeoff is our projects are going to take longer but I know in the long run it’s going to be a life saver for our sanity. 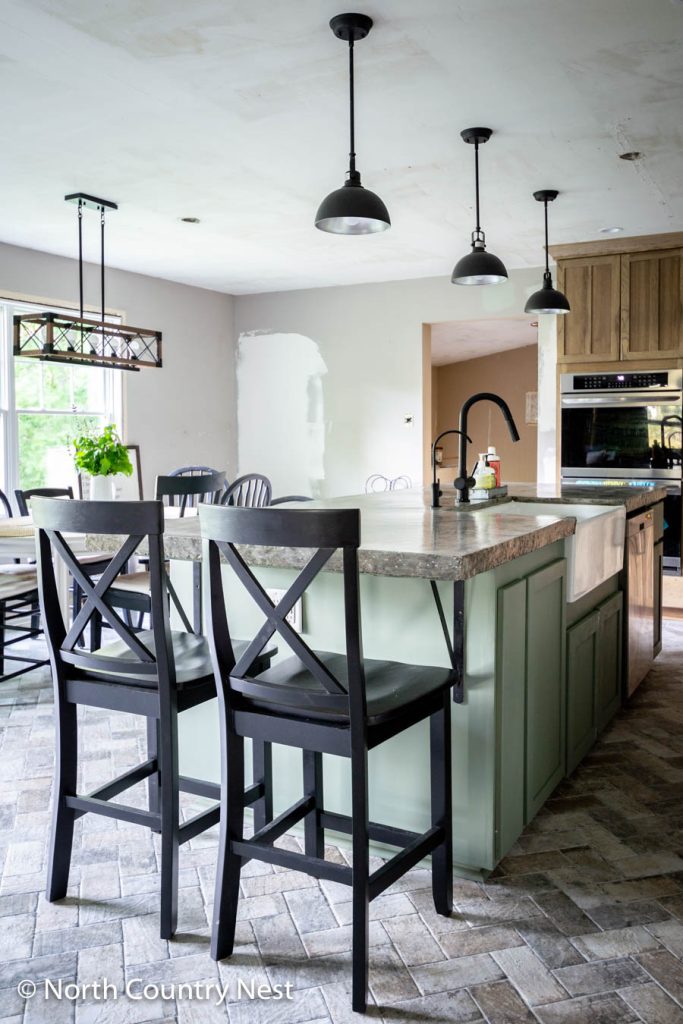 Brett and my dad knocked this one out in March and April and I cannot tell you how amazing it is to have a slider in the kitchen. I’m giddy just thinking about the future deck that we’ll be walking out to – maybe even as soon as next summer 🙂 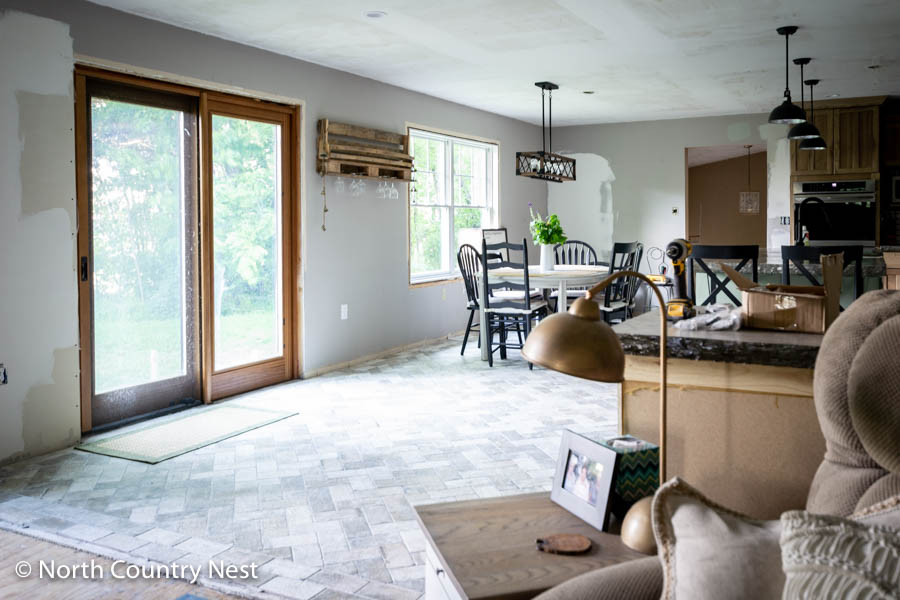 We also covered the small window in the kitchen and installed a new door to the backyard that has a window. That way we can still see the dogs when they’re ready to come in and get a full wall in the kitchen to decorate!

Another bonus? We replaced the basement window and added a slider!

We did get the overhead lighting and fan installed, and sheetrocked the back wall so there’s no longer exposed studs. 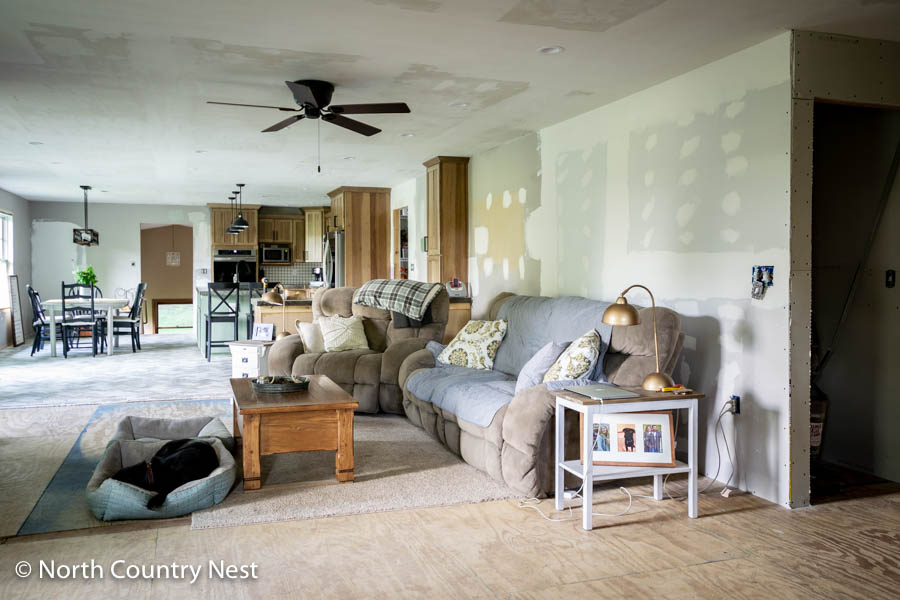 Everything was working great until about two weeks ago so Brett’s currently trying to figure out why the lighting and fan no longer work. Once we wrap up the kitchen, we’ll be mudding and sanding the back wall, probably along with the linen closet and stairway. I don’t know where we’re at in terms of timeline. We had hoped to be installing the floor (project #4) in the fall and we’d love the walls to be done prior to that. So, we’ll see!

We’ve decided to do carpeting in the bedrooms, so as of right now, we’ll just be doing the tile in the living room and hallways. Possibly the office as well but we haven’t gotten than far. The plan is still to do the flooring this fall, so at least we aren’t behind on that… yet 😛

There really wasn’t a timeline for this one but what makes the most sense is to wait until after the floor is installed. That way we have the actual trim measurements, rather than installing them and having to cut or add based on the height of the actual floor.

If I were to ask Brett, I think he’d tell me the garage will never be fully organized. Every time he gets a new tool, it’s back to reorganizing to make it all fit and look nice. 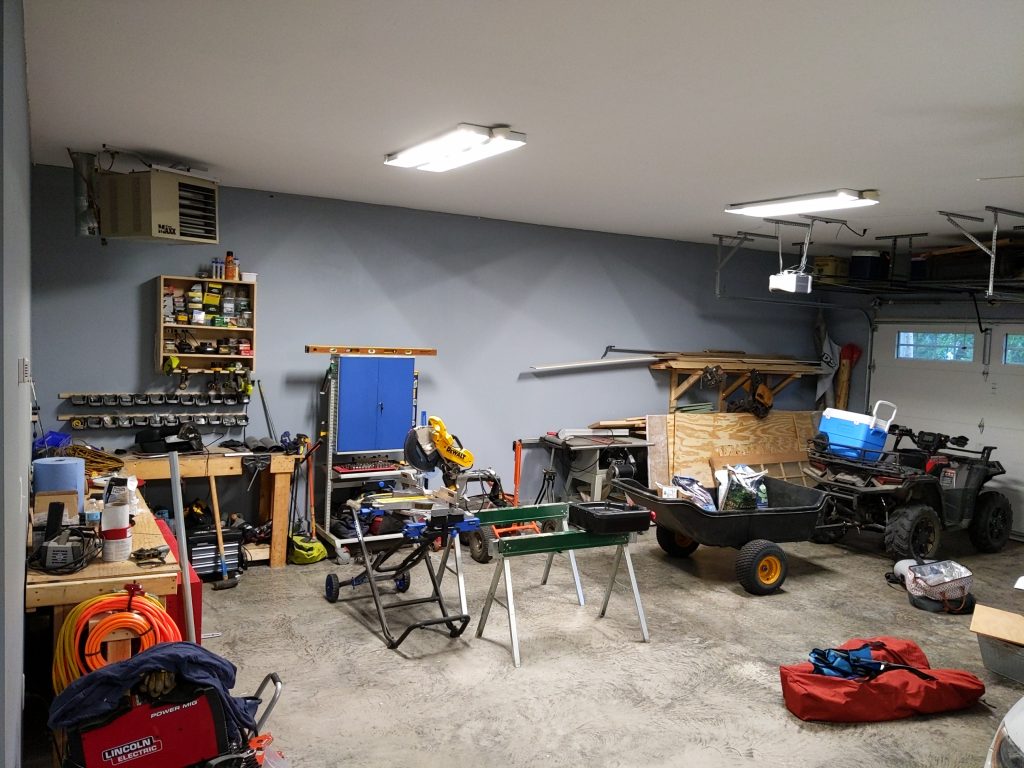 We did finally get the overhead storage racks so we’ll be giving a full garage tour soon!

This one hinges on finishing the floor, so we have not made any progress. 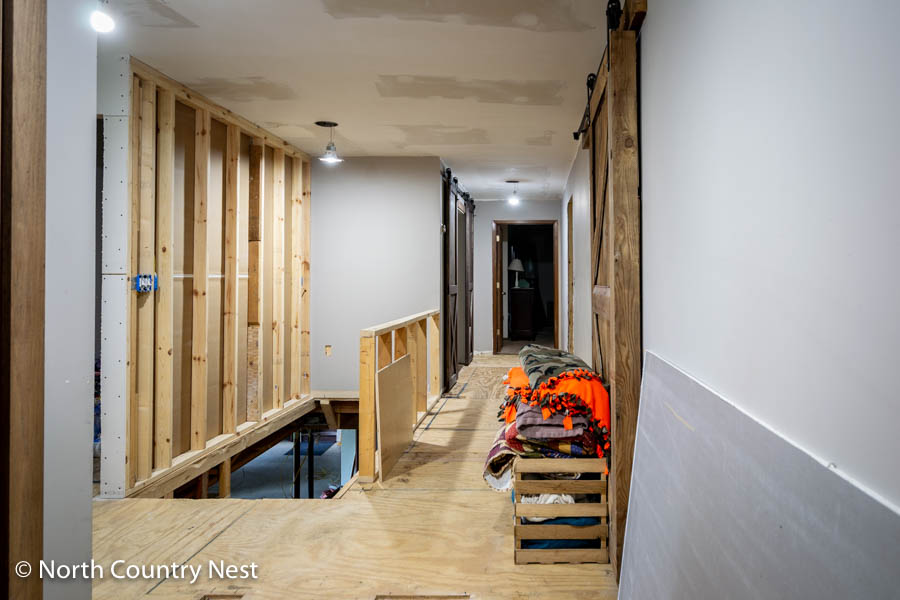 Although, Brett did get a new welding tool that we’ll be using for the railings so it’s at least on our mind! 🙂

I’m hopeful that after we get the kitchen done we’ll be able to finally tackle this one. 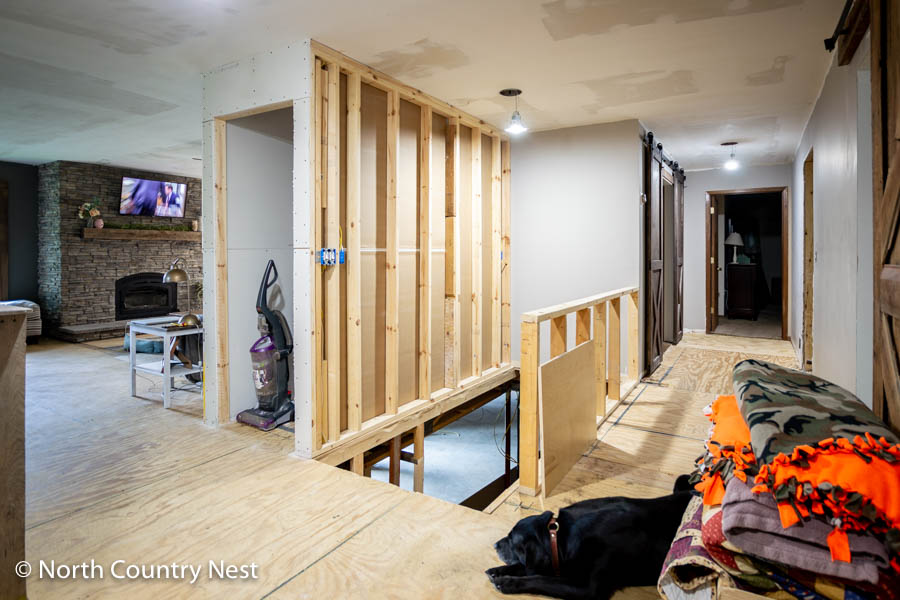 It’s an easy project that shouldn’t take too long. However, I’ve said that before so who knows what surprises we’ll come across once we actually start putting it together!

Plus, a Few New Additions!

Did you really think we wouldn’t have anything new to add? In our defense, we didn’t talk at all about landscaping/exterior projects because it’s hard to photograph and show off in the middle of January in Minnesota. At least we kept it just to two add-ons… for now.

All the retaining walls in the yard need to be replaced – the wood is rotting and it just looks sad. However, the largest one is probably not something we can tackle on our own, so we’re focusing our attention on the two smaller ones. 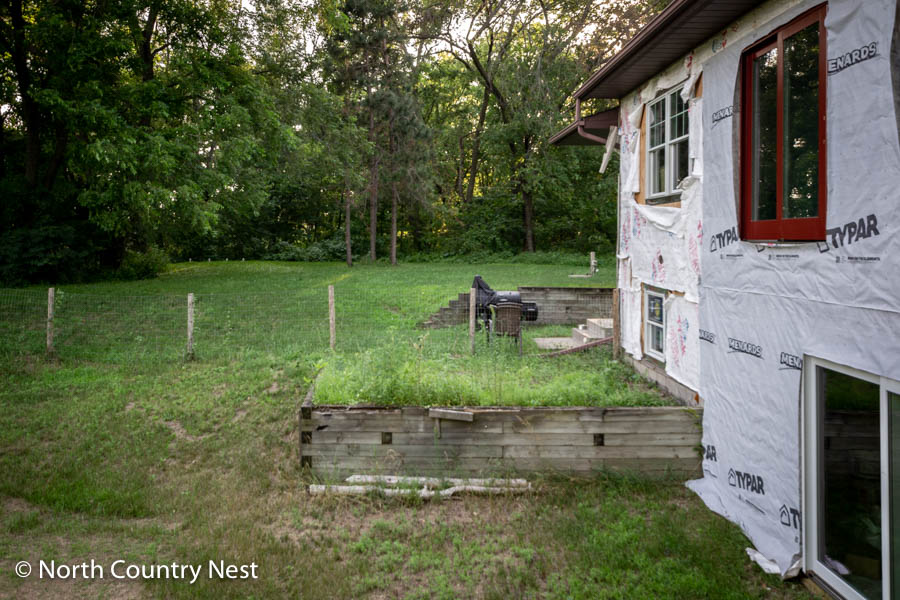 The square jut out was where we had the first flower garden and now that that’s moved, it’s an awkward space that doesn’t serve much purpose. So, we’re removing the railroad ties and replacing with stone (the same stone we used for the retaining wall we built last year) and then paving the top portion for a patio. 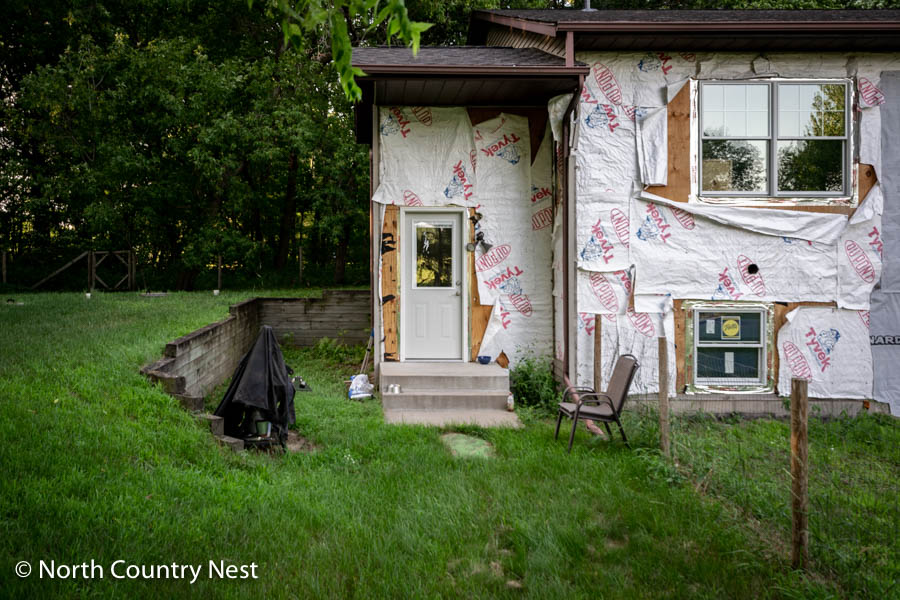 We’ll change the fence so it will include the patio in the backyard – it’ll be a great space to hang out while we’re grilling. 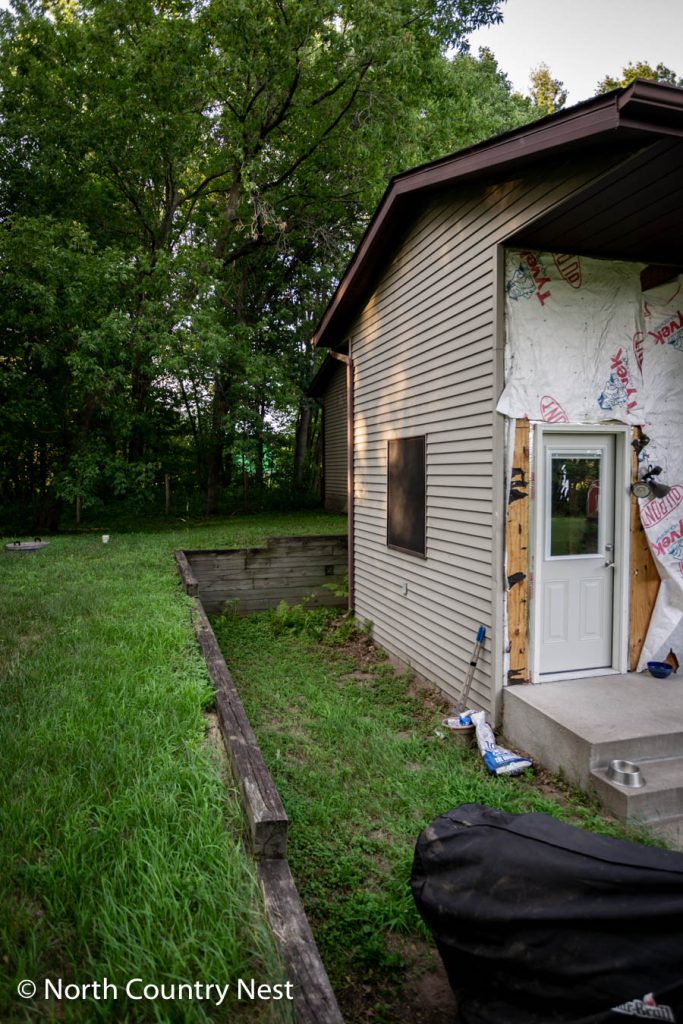 We’re also removing the retaining wall that’s on the side of the house and replacing with stone. There’s an equally awkward space that goes around the house – we’ll extend the pavers all the way around as well. Three cheers for less grass to mow!

This one seems like it’s out in left field, I know. However, something that we haven’t talked much about is not being happy with a finished space. Enter: Brett and the laundry room. 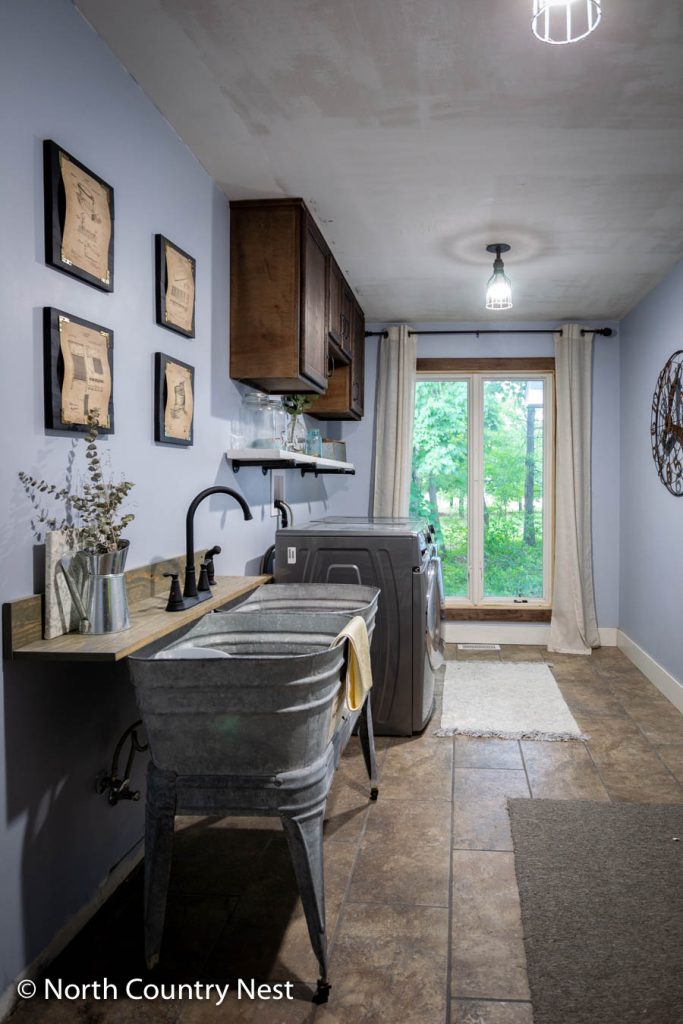 The biggest frustration is the washer and dryer covering part of the window. We didn’t think about that before we installed the new window and it’s one of those things that has bothered him since we finished the room. 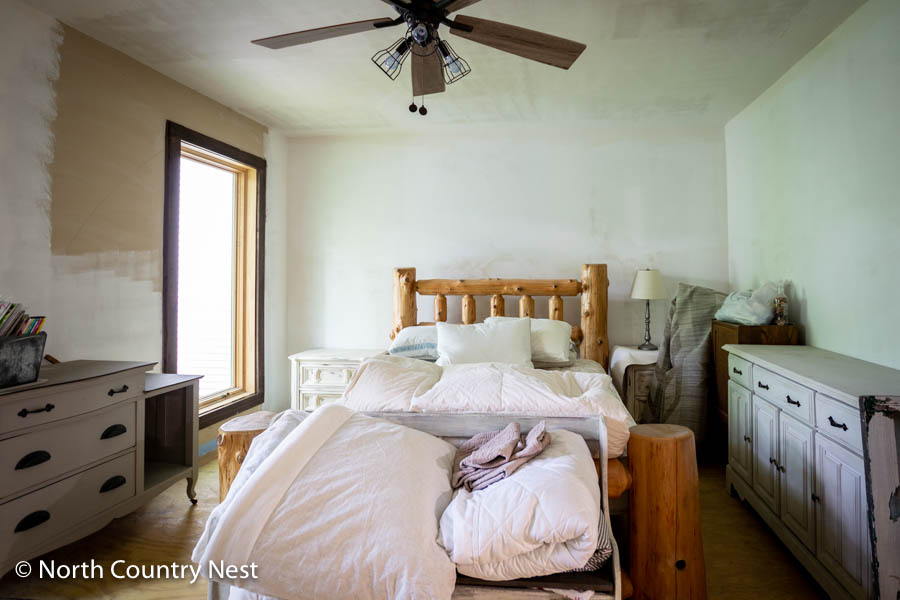 For me, it’s the guest bedroom and how big it is – currently, it’s a drop zone for all the crap but when it’ll actually function as a room, there will be so much wasted space.

Which brings us to the new plan. Every few months, we’ll brainstorm some ideas about how to fix these two rooms and then drop it for awhile. Well, this past spring, Brett thought of a solution that solves both issues. We’re going to push back the washer, dryer and cabinets into the guest bedroom so the front of them will be flush with the laundry room wall. That will decrease the size of the guest bedroom and uncover the laundry room window. In the guest bedroom, we’ll lose a window (that we can move to our bedroom or bathroom) and on the other half of the wall, will add some sort of floating shelves, storage or desk. It’s a win-win and let me tell you, it feels so good to come up with a plan that we’re both really, really excited about. Does it suck that we’re having to redo a wall that’s already been finished? Absolutely. But, we’re going to be here for awhile and the pros definitely outweigh the cons.

And there ya have it. We’re maybe a little behind on the kitchen but everything is slowly coming together. I still think we’ll be able to get it all done this year. Yes, I know we’re halfway through 2020 but thankfully, a lot of the projects are tied together so it’ll be a nice flow of checking them off the list at once.

A Bathroom Update: The Wonders of Paint

The Kitchen Update for March + The Appliance Debacle